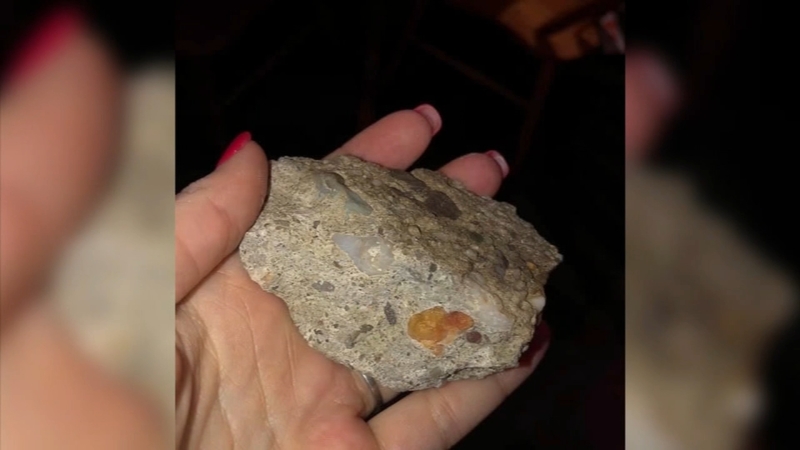 MEDFORD LAKES, New Jersey (WPVI) -- Police in two Burlington County, New Jersey municipalities are warning drivers to be alert after several drivers have had windows smashed on a busy road.

Investigators in Medford Lakes and Medford Township say it's likely someone throwing rocks at vehicles.

Macy Kemble says she now takes a different route to her Medford Lakes home after someone threw a rock through her passenger window on Tuckerton Road Thursday evening.

"All of a sudden my window shattered all over me. I initially thought an animal came through because I didn't see anything. It was just glass everywhere," said Kemble.

When she got home, a rock was discovered in her backseat.

"It came through the window with enough force it hit my arm and bounced in the backseat," she said.

Kemble says she posted photos of her shattered car window and the rock on Facebook to warn others to stay alert.

Police say she isn't the only victim. On February 4 on the same road in Medford Township, a family of four was startled - but not hurt - when something shattered one of their windows.

"When the window was struck it caused the backseat passenger to scream," said Lt. Arthur Waterman of Medford Township Police.

Police say they have thoroughly searched the area for evidence or surveillance video. They say throwing anything at a vehicle can be incredibly dangerous, and can cause the driver to lose control.

"These types of incidents are very serious. Could cause serious bodily injury or even death," said Waterman.

Diane DiPietro believes someone threw a rock at her vehicle on the same stretch of Tuckerton Road over the weekend. She says just before it happened, she slowed down because a log was in the middle of the road.

"I think they were throwing stuff out into the road. For sure. And that'll make people slow down and then they have a better shot at hitting their vehicle. That's what I think," said DiPietro.

Her window didn't break, but she hopes the incidents stop soon.

"Sometimes what we think is a prank isn't really a prank. It has serious ramifications," she said.