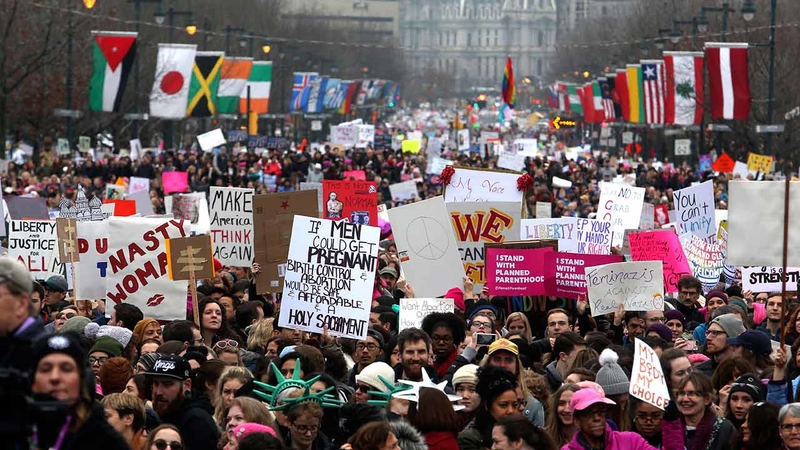 On Saturday afternoon, a spokesperson for Philadelphia Mayor Jim Kenney estimated 50,000 people turned out for the event.

The crowd size predicted earlier in the week was 20,000.

50k turned out in Philly today for #WomensMarch. Crowd prediction on Thursday was 20k.

Those who took part, one day after Republican Donald Trump's inauguration as president, moved peacefully through the streets and then listened to speakers at an afternoon rally.

Tracy Schwab of Lansdowne, Pa. said, "I fear rights for women will be eroded, certainly rights for all progress made in LGBT community.

Isiah Gaffney of North Philadelphia added, "I believe how they showcase themselves has become a threat to many minorities, including women and people of color.

"I think it says we're not going to lie down, lie down during this presidency. We have rights we need to fight for," said Nina Ball of Baltimore, Maryland.

Women's March in Philly: crowd chants, "This is what democracy looks like" pic.twitter.com/KAUcUiCwje

Marchers held signs, chanted and sang as they walked slowly down the Benjamin Franklin Parkway on Saturday morning as similar demonstrations took place in Washington and in other cities.

Organizers in Philadelphia called it a demonstration in support of the rights of women and America's diverse communities following a presidential election in which they say many groups were demonized.

Phyllis Naylor of Yardley walked with a cane. She says she's seen too much progress in her 91 years to sit back and watch.

She said, "I feel so deeply about the condition of our country and I don't want to be complacent, that's why we're here.

They say the marches are intended to unify the diverse communities in an effort to protect the rights of all.

Crowd is growing at Logan Square in preparation of the Women's March on Philadelphia. Due to start at 10 am. pic.twitter.com/gEWsY9UI1s

Marchers in Philadelphia started at Logan Square and were heading a half-mile down the Benjamin Franklin Parkway to hold a rally at Eakins Oval.

Many men have joined the Women's March at Eakins Oval. @6abc pic.twitter.com/wjvSYlI8vA

Mayor Jim Kenney kicked off the rally, calling for equality for all and unity.

"Now more than ever we need to be together, walk arm in arm, forward into history and progress. Remember we got through WW2, we'll get through this," said Mayor Kenney.

Many in the crowd once concerned about Donald Trump's campaign rhetoric, now convinced it wasn't just talk.

Sara Kreisman said, "He came into office and within a few minutes, major pages from the website were gone. The LGBT page, climate control, he's out of touch, his cabinet is out of touch.

Although far from DC, these protestors want their voices heard.