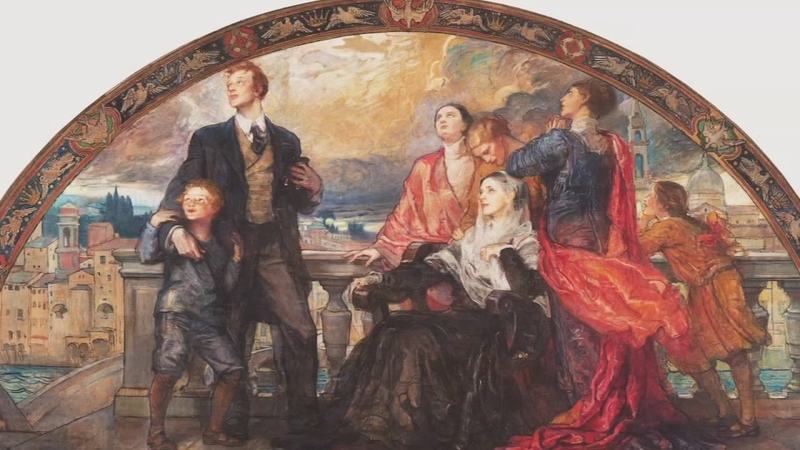 The Woodmere Museum in Chestnut Hill has a new exhibition that pays tribute to one of the region's most influential female artists.

Violet Oakley was born in New Jersey in 1874 during the aftermath of the Civil War.

The exhibition, called A Grand Vision, shows how Oakley used art to promote her platform of world peace and unity.

"She could have been the mayor of the arts in her time," claims Woodmere Director Bill Valerio. "She lived through the First World War and the Second World War and her life experiences told her that the world needed this coming together."

The exhibition features nearly 100 works including paintings, stained glass window designs, sketches and the murals Oakley was most famous for.

"She had projects that touched the whole world," says Valerio.

Her 1917 Unity Mural sits in the Pennsylvania State Capitol and shows the history of enslavement suffered by different races, "and she shows them being freed from the shackles and the chains around their ankles, and nobody did this," says Valerio. "I mean, she was an artist with a lot of guts."

In 1921 she designed the medal for the Philadelphia Awards, "which is something of our own Nobel Prize here in Philadelphia," explains Valerio. "And it's a beautiful gold medal."

Oakley's work is particularly significant to the Woodmere because her life partner, Edith Emerson, was the museum's director for 40 years.

"Edith made sure that we had this collection of her work to steward her reputation," says Valerio. "Violet Oakley was an inspiration for professional women in the United States before women even had at the right to vote," and that, Valerio says, is what he hopes people will see in the exhibition, "somebody who was groundbreaking."