Art of Aging: Art programs helping those with Alzheimer's 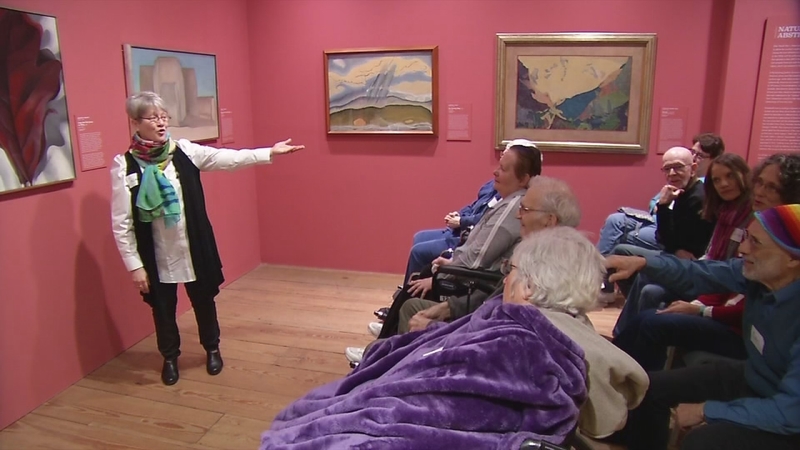 Art of Aging: Art programs helping those with Alzheimer's

WILMINGTON (WPVI) -- Art has been shown to enrich the lives of those with Alzheimer's and dementia by giving them an avenue to engage and express themselves. Now some local museums are responding with special programs.

At Wintertur in Wilmington, a monthly program called "Historical Journeys" offers patients in the earlier stages of dementia and their caregivers a fun way to get out.

"They are typically feeling a sense of isolation. Their social spheres may be withdrawing a little bit, so having a chance to be in an environment with peers, they have the opportunity to interact with these exhibits in a way that's comfortable for them, without fear of judgment," said David Johnson, Rec Center Coordinator for the Alzheimer's Association - Delaware Valley Chapter.

The program is held the second Tuesday of the month in partnership with the Alzheimer's Association's Delaware Valley Chapter and the docents focus on familiar objects, like the DuPont family's china collection.

"It can bring up memories of family dinners, Thanksgivings, and Christmas when you bring out those special dishes," said Jen Jackson, Winterthur Guide.

Denise and Allen Kazmierski travelled from Chester County for the program. Allen has been diagnosed with early stage Alzheimer's.

"My wife suggested it. You don't want to just sit home and stare at the wall," said Allen.

"I think it's helpful for both of us," added Denise.

In Chester County, the Brandywine River Museum is partnering with ARTZ, a non-profit that uses the arts to connect to people with Alzheimer's and dementia.

"I think the most beneficial part is just that it gets them talking. It gets them talking about what they're seeing, thinking about things, referencing things in their past often," said Laura Westmoreland, Associate Educator at the Brandywine River Museum of Art.

Susan Jewett says the program has been life-changing for her and her longtime partner.

"When we first came to the ARTZ program, the very first time, it's as if he blossomed again and became excited and came out of his shell," she said.

The hour-long discussions over a work of art also create community.

"It's a situation in which they can feel each other's sense of pride, sense of self, sense of joy," said Susan Shifrin, Executive Director of ARTZ Philadelphia.

"The discussion is really very spirited and often very amusing...it charges both of us up for the day and often for days afterwards," said Jewett.