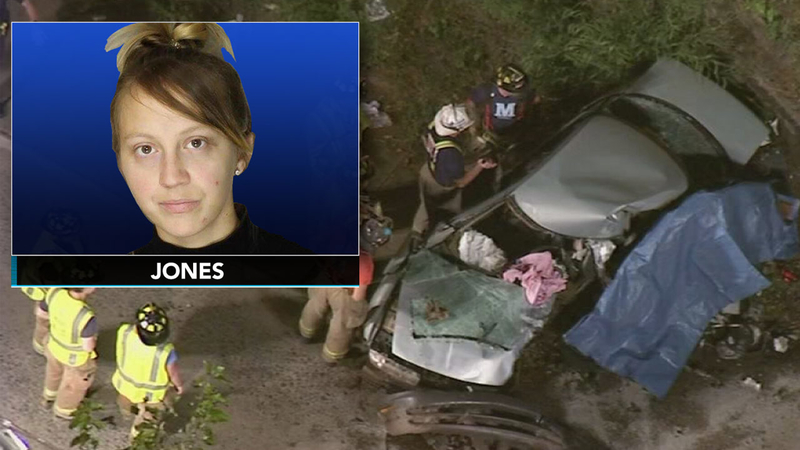 BEDMINSTER TWP., Pa. (WPVI) -- A woman has been charged with third-degree murder for allegedly driving under the influence of drugs and causing a fatal crash last month in Bucks County.

Jaclyn Jones, 30, of Foeller Lane in Nockamixon Township, was charged on Thursday for the crash that killed 21-year-old Chris Marinelli and seriously injured his 20-year-old girlfriend, Gabrialle Otero.

The crash happened on Route 611 in Bedminster Township around 9 p.m. on August 30.

Police say Jones had numerous prescription drugs in her system, including amphetamine, oxycodone, and fentanyl, when her Jeep Patriot crossed the center line and crashed head-on into the Saturn that Marinelli was driving.

Authorities say she was also driving with a suspended license.

Bucks County Deputy District Attorney Robert James said, "One of the reasons she's charged with third degree murder in this case is because, as the affidavit states, she's on her third DUI."

She was granted an occupational limited license by PennDOT to drive to and from work. But authorities say on the night of the crash she was shopping at the Willow Grove Park Mall.

"We have a receipt that demonstrates she was coming from a shopping spree," James said.

The district attorneys' office, quoting an affidavit, said "Jones' parents told police that their daughter takes prescription drugs as a result of Lyme disease, including oxycodone and clonazepam."

James is chief of the Homicide by Vehicle Unit for the Bucks County district attorney's office. He says he's seeing an alarming number of cases like this one.

"In the past nine months alone, my office has charged five different defendants with third degree murder in crash-related cases," he said.

He hopes more serious charges, with more potential jail time, will deter people from driving under the influence.

Along with third-degree murder, Jones was also charged with aggravated assault and homicide by vehicle while DUI. She is being held on 10% of $1 million cash. A preliminary hearing is set for next month.

They say she is home from the hospital, but has a long road ahead of her. She suffered a fractured skull, brain trauma and numerous broken bones.

They say an arrest is just one step towards justice for their daughter and her late boyfriend.

Meanwhile, the family of Chris Marinelli is raising money for Otero's medical expenses through a GoFundMe campaign, hoping someday she'll be able to return to Temple University where she was studying bio-chemistry.