WPVI
By by: Nydia Han and Heather Grubola 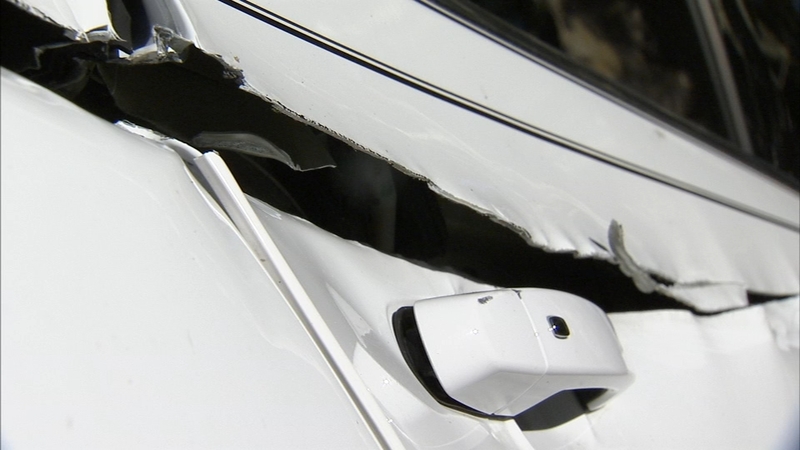 Florence, New Jersey (WPVI) -- We've all found ourselves driving behind a tractor trailer or some other vehicle carrying a load that looks potentially dangerous. For one South Jersey woman that scenario turned into a real nightmare for her and her brand new car.

"My girlfriend was sitting right there on the passenger side and we didn't even know what hit us," explained Michelle Marx of Florence, New Jersey. "Thank God we are alive because her head could have been decapitated."

The metal had flown off a truck in the lane next to Marx on Roosevelt Boulevard.

"It was almost like a pressure. It was so quick that you really could not feel anything, except a jolt," Marx said.

The truck belongs to Metals USA which is operated by Ryder. Ryder's insurance adjuster offered Marx a preliminary estimate of $8500, which didn't sit well with her considering she bought the car brand new one month ago.

Marx contacted the Action News Troubleshooters because she felt Ryder should replace her car with another new vehicle. Her attorney agreed.

"You don't expect, driving down Roosevelt Boulevard, to be hit by a flying piece of sheet metal coming off the back of a flat bed truck. It's indefensible," said Scott Bennett of the Beasley Firm.

Pennsylvania State Police say drivers are responsible for making sure their loads are secure at all times.

"If a load does come off, it shifts, it leaks out onto the highway, that is a summary offense," said Trooper Timothy Greene.

If you see something that looks unsafe you are urged to dial 911. And be aware, especially during the winter months, your own car could be carrying a dangerous load in the form of snow and ice.

"We've had many incidents where it has shattered the front windshields of other vehicles. So we do strongly suggest that people do clear off their car before they operate," said Trooper Greene.

As for Michelle Marx, after the Troubleshooters contacted Ryder, the company did agree "to declare her vehicle a total loss" and make Marx whole. Ryder paid her "for the full value of her vehicle in excess of $25,000."