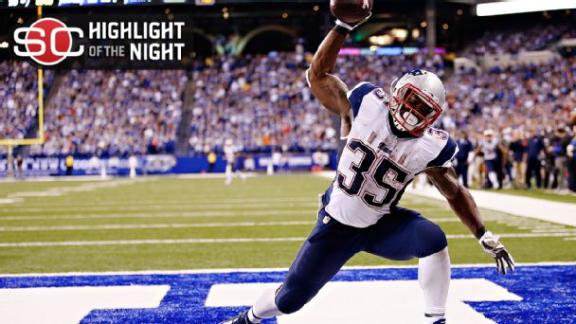 The NFL and Elias Sports Bureau made an official change to Gray's rushing total for Sunday night, giving him 37 carries for 201 yards instead of 38 carries for 199 yards.

In the fourth quarter on third-and-2 with 10:31 remaining, Gray had a carry that went for negative-2 yards, but there was a penalty that was enforced on the play. The Colts were offsides, but the accepted penalty was a personal foul facemask on Colts linebacker Erik Walden.

With that play now having been nullified, Gray gets those 2 yards back (and finishes with zero negative rushes).

He also now becomes the third running back in Patriots history to rush for 200-plus yards in a game. Only Tony Collins, who rushed for 212 yards Sept. 18, 1983, against the New York Jets, and Jim Nance, who rushed for 208 yards Oct. 30, 1966, against Oakland, have rushed for more yards in a single game in a Patriots uniform.

Until this past week in the NFL, no player had rushed for 200-plus yards in a game this season. With the stat correction, Gray joins Pittsburgh Steelers' running back Le'Veon Bell, who ran for 204 yards Monday night, as the only players to accomplish the feat this season.

Jonas Gray Working On His Craft
Patriots RB Jonas Gray discusses his big game against the Colts on Sunday night.

Fantasy Now: Jonas Gray
After a monster Week 11, Jonas Gray is a popular pickup but should you start him in Week 12?