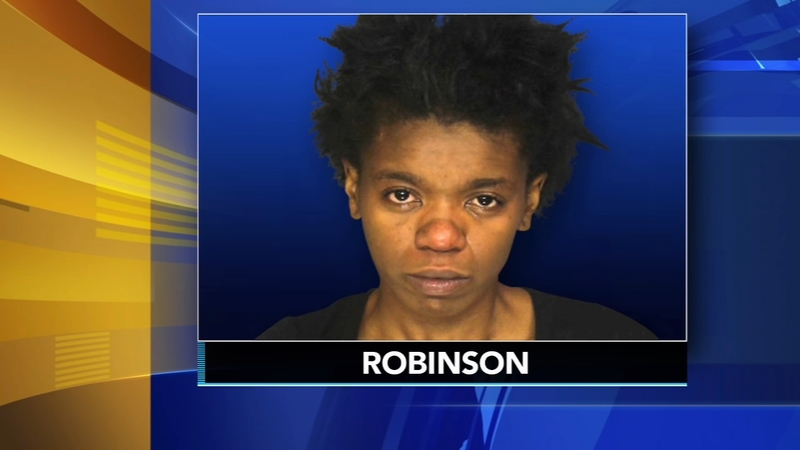 PARKESBURG, Pa. (WPVI) -- A mother from Chester County is under arrest for allegedly shoving her 5-year-old daughter down basement steps, killing her.

25-year-old Ciara Robinson is charged with murder in the death of Amatulah "Amy" McLaughlin.

On a night when many children were out trick-or-treating with their families, one little girl would meet her untimely death.

But more disturbing than that, authorities say it was at the hands of her own mother.

Chester District Attorney Tom Hogan tells the agonizing tale of a 5-year-old girl who he says was murdered in her own home in the 400 block of Walnut Street in rural Parkesburg.

D.A. Hogan says that Robinson intentionally pushed the child down a flight of stairs leading to the basement.

"Eight-Nine feet down a set of stairs, concrete at the bottom of it, and the little girl hits her head and that's what killed her," he said.

Although she would later deny saying it, responding medics and police say they heard Robinson say that she was just mad at the child and that she should not have pushed her down the stairs.

An autopsy revealed the child suffered bleeding of the brain leading to her death.

But as they went through the autopsy report, authorities would find some other very disturbing things.

"We found on her arms, on her legs, on her back, we found bruising, we found puncture wounds, we found scarring, we found lash marks, this little girl had been badly abused," said D.A. Hogan.

"I had no idea about the abuse was going on like that. I live upstairs and everything and I just didn't see it," said Gaittens.
Gaittens says Robinson also has a 2-year-old son with another one on the way.

"You know, I knew the children, actually I let them upstairs a few times to watch cartoon network because the mother didn't have cable or anything," he said.

D.A. Hogan says it's hard to believe any mother would do that to their own child.

"On a night when you got so many kids who are having so much fun with their parents, being taken around going door to door and having fun, this little girl's life ended. She will never have a chance to go trick-or-treating again," added Hogan.

Ciara Robinson remains behind bars on charges of third degree murder and manslaughter, and also aggravated assault and child endangerment for the alleged abuse authorities say was going on for about a year.

The 2-year-old son is now in protective custody with a child care agency.