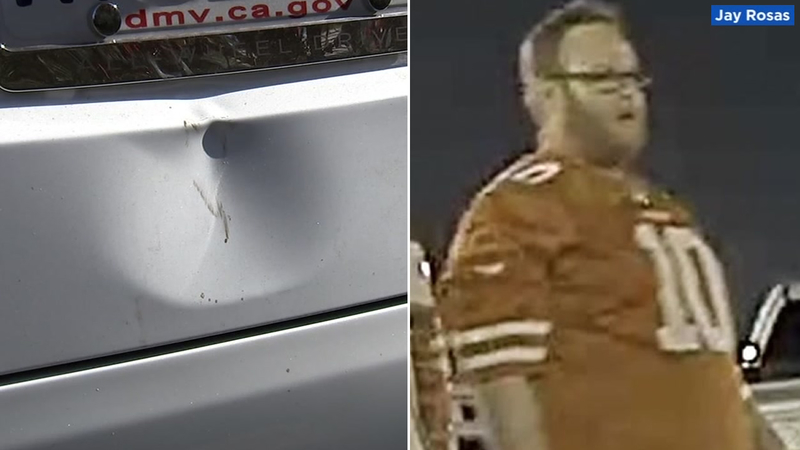 SANTA CLARA, Calif. -- An act of vehicle vandalism during last week's San Francisco 49ers game against the Seattle Seahawks at Levi's Stadium in Santa Clara is generating a lot of attention because it was all caught on camera. And the person responsible for the crime could potentially face jail time.

Shortly before the end of the first half of the Nov. 11 contest, Bay Area resident Jay Rosas was alerted to a break-in involving his Tesla Model X in the Levi's Stadium parking lot.

"I ended up missing most of the game because I was outside dealing with the security people, the CHP, the police report, and we ended up losing the game, so it really kind of sucked," said Rosas. "To see another fan do that to our vehicle was really saddening and unfortunate."

Rosas found a large dent on the trunk underneath the license plate upon returning to the vehicle. But Tesla's Sentry Mode appears to have caught the suspect in the act. Earlier this year, Tesla rolled out its 360-degree surveillance system to help protect vehicles from bumps and break-ins. The technology uses eight onboard cameras to detect any potential threats.

The video, which has since been provided to Santa Clara police, shows a man wearing a 49ers jersey kicking the trunk and leaving more than $4,700 in damage. Police are now investigating the case and say the person responsible could face felony charges.

"It is not typical for there to be intentional damage on vehicles like the one I've seen in this case. It's actually quite rare," said Santa Clara Police Capt. Wahid Kazem, Santa Clara Police Dept. "Nonetheless, it is a crime, given the magnitude of damage on this car, and the approximate cost of repair."

As a reward, Rosas is offering $1,000 or two 49ers tickets for information leading to an arrest.