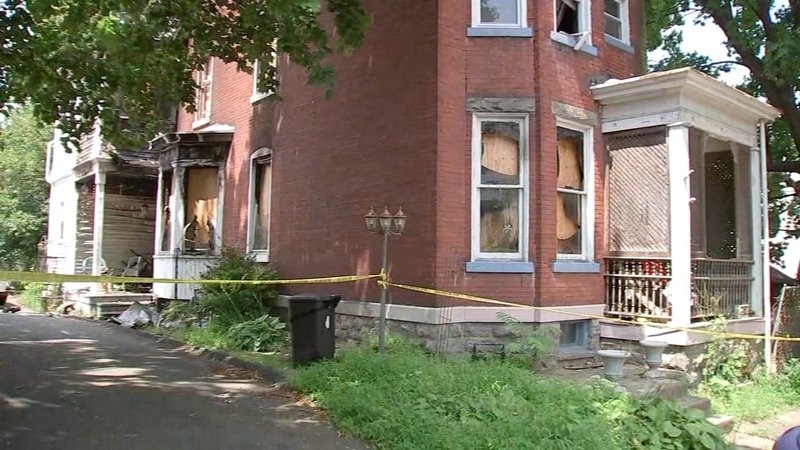 EASTON, Pa. (WPVI) -- Two Easton, Pa. firefighters are recovering from injuries they suffered while bringing people to safety during an overnight blaze.

It was right around 1 a.m. Monday when neighbors who live along the 100 block of South 8th Street in Easton, Pa. started hearing some kind of commotion outside their homes.

Stephanie Miller says she looked out of her rear window to see an orange glow coming from inside her neighbor's house.

She says,"Next thing you know the whole first floor is engulfed in flames."

Easton firefighters quickly arrived to find two women on top of a bay window roof, after they tried to escape the flames through a 2nd floor window.

Once she was safe, Wuttle got back on the ladder to save 22-year-old Shania Reed.

Easton Fire Captain Joseph Brown says, "As Wuttle was making his way up the second time to get the second person there, the fire had now breached one of the windows, actually burning the lieutenant."

Lt. Wuttle was forced to jump off the ladder after suffering burns to his fingers and neck.

First responders then started yelling at Shania Reed telling her to jump.

And that's exactly what she did.

The only problem is that the firefighter who was trying to catc her, Justin Pichaj, couldn't see her coming.

Captain Brown says, "Before he got into position to actually grab her she had jumped through the smoke and flames and did land on him and he broke her fall, but he also got hurt in the process."

Both Shania Reed and Firefighter Pichaj were admitted to the ICU at St. Luke's Hospital but both are expected to fully recover.

First responders say the heroism of Easton firefighters and working smoke detectors inside the home combined to help give this story a happy ending.

The investigation into the cause of the blaze continues.