Long journey for Exton wrestler who got cancer in Rwanda. Now he wants to help others 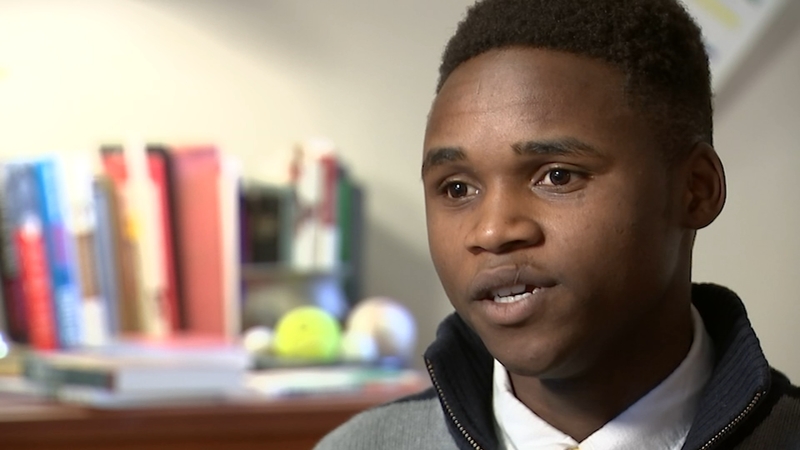 Long journey for Exton wrestler who got cancer in Rwanda

EXTON, Pennsylvania (WPVI) -- When Sibo Tuyishimire plays his handmade violin, it takes him back to simpler times beyond the wrestling mat, before the hospital beds and back to the tiny village in Rwanda where his story began.

Having lost 10 of her children already to illness, and the Rwandan genocide, his mother was very protective of her youngest. But Sibo became very sick.

She carried him on her back from doctor to doctor, trying to find someone to treat him. The doctors in the village believed he was poisoned, or that he had a frog, in his stomach.

What he actually had was cancer. Sibo would spend the next five years of his life, undergoing chemotherapy completely alone.

Dr. Sara Stulac, who worked for a nonprofit, Partners in Health, saved Sibo's life, and fought to convince his mother to send him to the United States for a bone marrow transplant.

She told his mother "If you don't let your son go to America for treatment, he is going to die," recalled Stulac.

Sibo said he had never even heard of the United States. There, he went to live with David and Rebecca Burns and their family, who became his family. They fought for him to stay here for a better education, and now he's in Exton at Church Farm School, where he's excelling as a sophomore.

Ned Sherrill, the head of the school, says "that little glint in his eye, that little sparkle that just captures you."

Having never competed in a sport in his life, Sibo picked up wrestling which seemed fitting.

"It's a sport that encourages you to just keep going," Sibo says. "You can't compete in wrestling if you're a quitter."

Coach Art Smith says, "Sibo's got such a great spirit about him, he's really helped our team, never give up, always smiling." And it's that contagious smile that captures you. Having already overcome the greatest of odds, it's probably no surprise what he wants to do next.