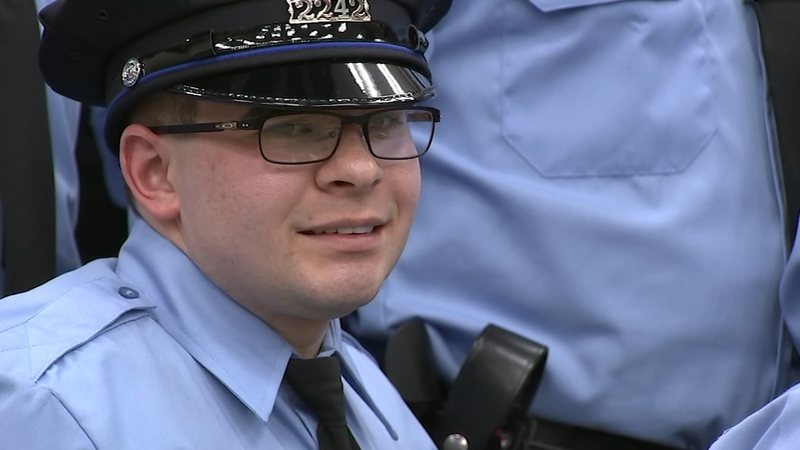 "I knew I needed to live my life and be true to who I was. I need to be honest with myself, and that was coming out as a transgender male," he said.

After nine months of training, Churgai, 24, was sworn in as part of the department's 391st class during a ceremony on Friday morning. Churgai, of Northeast Philadelphia, is the first trans person to reveal their identity before the process, and then complete the academy to graduate.

His close friends and family know his truth, but during the long months of training, he kept his full identity a secret from his classmates.

"I wanted to go through the academy like every other recruit. I didn't want people to know I was transgender because I didn't want to be treated differently. I wanted to be held to the same standards as everybody else," Churgai said.

That standard meant having to keep up with the men during training, and Churgai succeeded.

"Sometimes it seems that your hopes and dreams are not possible when you come out as transgender, but it is possible," he said. "It is possible to be who you want to be and do the career you want to have, it's possible. Just because your trans it doesn't mean you can't."

Two days before graduation, he ended his secrecy and told his fellow classmates the truth.

Benson Churgai shares his coming out letter to Philadelphia recruits.

"I was shaking I was scared but everybody seemed to appreciate the courage that I had to do that," Churgai said.

"I wanted to go up there and stand next to him. I couldn't imagine having to do that, especially with that news, so I gave him a lot of credit and I want to thank him," she said.

Officer Churgai is now etched in the department's history books, but he hopes his presence will make a difference on the streets right now.

"I hope it gives (others in the LGBTQQIA community) the courage they need to call 911 if they need help. To be able to reach out and feel like they will be treated like every other person, and that the police department is being proactive in hiring people of their community onto the force," he said.
Report a correction or typo
Related topics:
societyphiladelphiatransgendersocietypolice officerphiladelphia police
Copyright © 2021 WPVI-TV. All Rights Reserved.
TOP STORIES
AccuWeather Alert: Tracking downpours, localized flash flooding
Coach: Going to other rec centers is a 'death sentence for the youth'
'Aunt Mary Pat' opens up about fight with anxiety, depression
'Give me my food:' Woman pulls gun while in line at Chipotle
Bus driver shortage has another school district offering parents money
Philly shootings leave 2 dead, 6 hurt on Wednesday
117 PSU students temporarily suspended for missing COVID-19 tests
Show More
PPA to begin cracking down on illegal parking in bike lanes
Search resumes for Brian Laundrie in Gabby Petito case
Melvin Van Peebles, godfather of Black cinema, dies at 89
Deadline approaching for phone companies to follow new robocall rules
Harper's throw to plate saves Phillies' 4-3 win over O's
More TOP STORIES News