Columbus monument in Trenton, New Jersey covered after vandalism, some call for its removal 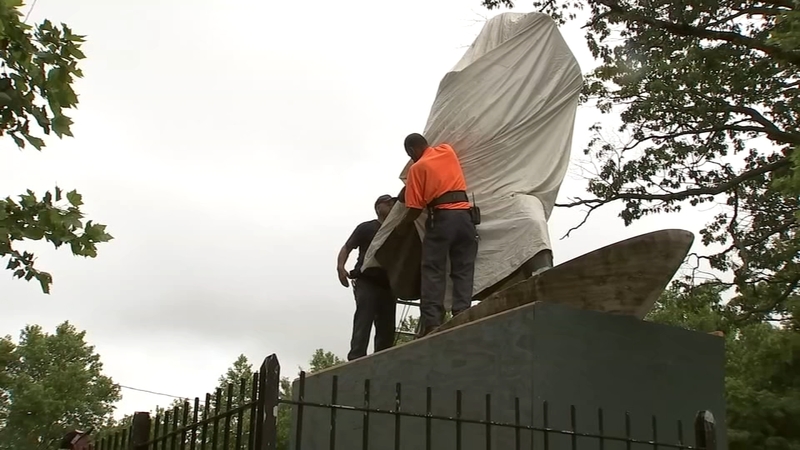 TRENTON, New Jersey (WPVI) -- The Christopher Columbus statue in Trenton, New Jersey has been covered after it was vandalized Tuesday night.

Now the mayor says a discussion will begin about the future of the statue after some are calling for its removal.

Thursday morning city crews put boards around the base of the statue before covering Columbus with a tarp.
"The history of Christopher Columbus for so long has been wrong. It has been lies. It has been traumatizing to African Americans, Latinx, the black community," said Niambi McCoy.

Tension over the Christoper Columbus statue at Marconi Plaza continued on Wednesday in South Philadelphia.

McCoy lives near the park, and is organizing an event for next Thursday, calling for the statue to be removed. She's a graduate student, working on a thesis about monuments and social justice.

"What it's really studying is the component of social justice and how erecting monuments and taking down monuments such as Columbus is going to impact neighborhoods of urban communities such as mine," said McCoy.

Trenton Mayor Reed Gusciora says he wants to protect the statue from further vandalism. He also plans to hold some kind of forum to discuss the statue's future.

"What we want to do is box it up to protect it. It is a piece of art at the end of the day. And to have that community discussion of whether it should remain there, whether it should be taken away," said Gusciora.
The statue is located in the Chambersburg section of Trenton, which was once a predominately Italian neighborhood. But the area has changed.

"It's become a Latino quarter. So the question is whether that's still relevant for that area," said Gusciora.

The Christopher Columbus statue has been removed from Farnham Park in Camden, New Jersey.

Jeffrey Laurenti lives near the statue, and has participated in Columbus Day ceremonies there in the past. He says while Columbus wasn't perfect, he believes the statue should stay.

"The fact is, that somebody had the pluck to organize an expedition, find sponsorship, that has changed history profoundly," said Laurenti.