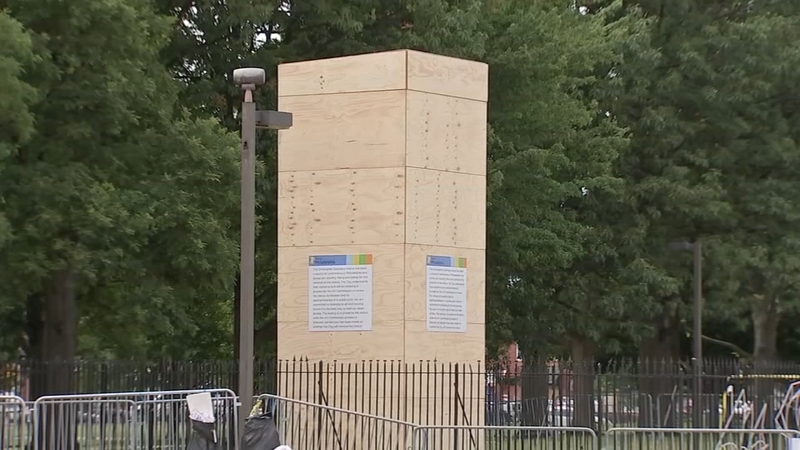 Some residents claim the statue is an important part of Italian-American heritage and should be left alone. Others were denouncing Columbus, calling him a symbol of hate and oppression.


For Kennadi Eastridge, it's an insult to see the statue standing.

"A lot of people here have been saying that we're taking down their heritage and that's not what we want at all. We want there to be better examples of history," said Eastridge.

She said she's protesting to have a dialogue, not a physical fight.

"I'm here honestly just to stand in protest. This isn't right anymore and we should finally take the statue down," said Eastridge.

But for those who want to keep it up, like Michael Vasos, he sees what's been happening there much differently.

"You have these people coming in here, yeah they're protesting, but they're attacking our heritage," said Vasos.

He said protesters like Eastridge may mean no physical harm, but he and others believe some others over the weekend did.
"We don't want to go to battle with these people, but we're gonna defend our neighborhood," Vasos said.

Robert Cannavo also wants to keep the statue up, but he said, "As an Italian American, I will be the first to tell you Columbus is not the greatest representative for Italian Americans."

Cannavo is open to other solutions.

"If the protesters want to come up with a better representative for who can replace Columbus, I'm all for listening to that," added Cannavo.

But it's not just in South Philadelphia. In Chester, Pennsylvania, a Columbus statue has been wrapped in a blue tarp.

Officials in Camden, New Jersey took theirs down last week.

In Trenton, the statue may be removed after it was vandalized Tuesday night.

The future of the South Philadelphia statue remains unclear.

Mayor Jim Kenney on Monday announced plans to initiate a public process to consider the future of the statue.