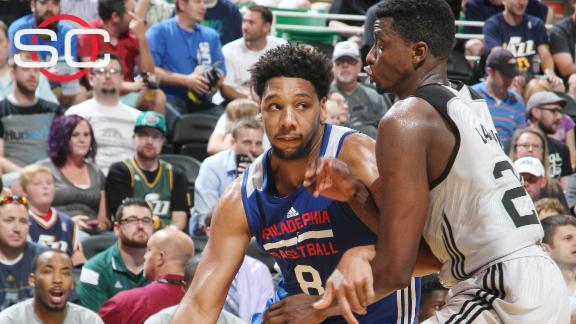 The No. 3 pick of the 2015 draft also grabbed 10 rebounds and recorded two blocks in Philadelphia's 74-71 loss at EnergySolutions Arena.

The 6-foot-11, 270-pound Duke product missed eight of his 11 first-half attempts, but was fluid in the post after intermission and showed touch on his jumpers, sinking seven of 11 shots. In the third quarter, he missed on only one of his five attempts.

"His heart is so pure that he probably pressed," 76ers summer league coach Billy Lange said. "Once he settled in in the third quarter and we started drawing plays up for him ... I thought he did really, really well."

Asked to assess his NBA debut, Okafor, who also had four turnovers and four blocked attempts in 29 minutes of action, gave himself a C-minus, according to ESPN.com's Chris Forsberg.