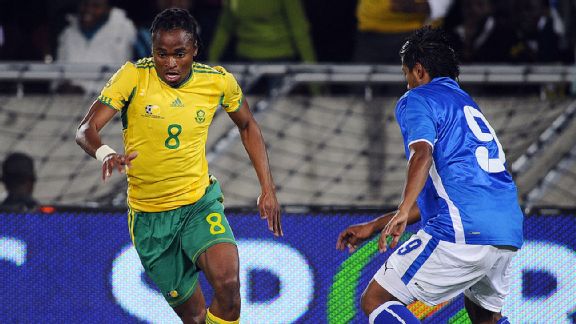 ESPN
By ESPN staff
As many as five international friendlies played in South Africa in advance of the 2010 World Cup were apparently manipulated, the New York Times reported on Saturday.

Citing a leaked FIFA investigative report and other related documents, the newspaper reported that up to 12 matches may have been targeted for fixing. None of those in question were part of the World Cup.

According to the Times, it is "probable" that the matches were fixed so that gamblers could win by making bets based on the knowledge of the fixed results.

The investigation is ongoing, a FIFA spokesperson told the Times.

One of the five matches that appeared to be manipulated, the Times learned, was the pre-World Cup friendly between Guatemala and South Africa. The host nation won the match 5-0, with two of the goals coming on questionable handballs that resulted in penalty kicks. The other four matches were not named.

FIFA has not accused anyone of match fixing at this point, according to the report, but referee Ibrahim Chaibou of Niger is at the center of the investigation after making a large deposit in advance of the South Africa-Guatemala game.

Chaibou told the Times in a phone interview that FIFA had not contacted him since his retirement in 2011, and that he has never fixed a match. But he declined to answer any questions about money he may have received in South Africa. He also denied to the Times any contact with Wilson Raj Perumal, an international gambler who's called himself "the world's most prolific match fixer." FIFA has listed him as the suspected mastermind of the South Africa scheme, the Times reported.

Chaibou was also the referee of a 2011 friendly between Nigeria and Argentina that ended with a controversial handball call that resulted in a penalty kick at eight minutes into injury time. The penalty was converted for a meaningless fifth goal in the game that Nigeria won 4-1. However, an ESPN FC report at the time said a huge amount of money had been wagered in Asian gambling markets on a fifth goal being scored.

The news comes at an awkward time for FIFA with the start of the 2014 World Cup in Brazil less than two weeks away.