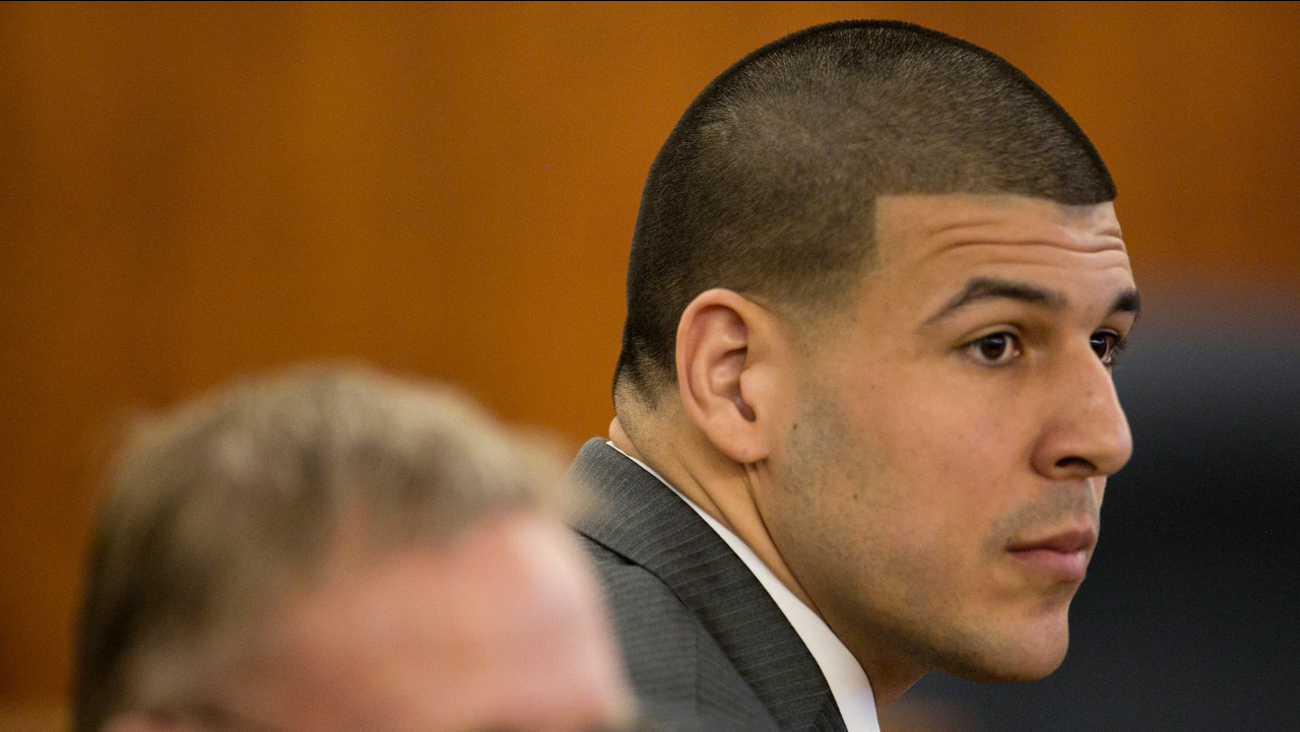 BOSTON -- Ex-NFL star Aaron Hernandez, who is already serving a life sentence for a 2013 murder, was acquitted Friday in a 2012 double slaying prosecutors said was fueled by his anger over a spilled drink.

The former tight end for the New England Patriots choked back tears as the verdicts were read in Boston. A few moments later, he looked back at his fiancee and nodded somberly as relatives of the victims sobbed loudly. A defense attorney hugged him.

After six days of deliberations, the jury found Hernandez not guilty of first-degree murder in the killings of Daniel de Abreu and Safiro Furtado. It convicted him of a single charge: unlawful possession of a gun. The judge sentenced him to an additional four to five years in prison, separate from his existing life sentence.

Suffolk District Attorney Daniel Conley said the victims' families were devastated by the verdicts as well as by the defense's portrayal of the men as "gang bangers" and "drug dealers."

"These were two hardworking, humble, Cape Verdean immigrants," Conley said. "It was unnecessary and it was wrong, and it shouldn't have been done."

Conley said prosecutors and the families take solace in the fact that Hernandez is serving a life sentence in the 2013 killing of Odin Lloyd, a semi-professional football player who was dating the sister of Hernandez's fiancee. Prosecutors in the double-murder trial weren't allowed to mention his conviction in Lloyd's case.

"One of the victims' relatives said, 'At least he's not walking out the door today,'" Conley said.

The defense team had pointed the finger at Alexander Bradley, an admitted drug dealer and a close friend of Hernandez who was with him the night of the shootings. The defense hammered at Bradley's credibility, citing his immunity deal with prosecutors to testify against Hernandez, his role as the driver of the car the night of the shootings and his criminal record. Bradley is serving a five-year prison term in Connecticut for firing shots at a Hartford nightclub in 2014.

Bradley testified that Hernandez became enraged after de Abreu bumped into him while dancing, spilling his drink at a Boston nightclub. He said Hernandez later opened fire on the men's car as they waited at a stoplight.

Prosecutors charged Hernandez with shooting Bradley in the face months after the double slaying to try to silence him as a witness. Bradley lost his right eye; Hernandez was acquitted of witness intimidation.

Defense attorney Ronald Sullivan Jr. said the jury was able to see through the "smoke and mirrors" that made up the state's case. He described Hernandez as a "very good young man who happened to hang out with a very bad guy in Alexander Bradley."

Conley said Friday that prosecutors would not go after Bradley in the killings because they believe they already charged the right person.

"Our theory of the case stands," Conley said. "In our minds, (the evidence) points inescapably to Aaron Hernandez."

Jury forewoman Lindsey Stringer read a statement outside court noting the more than 70 witnesses and over 380 exhibits presented in the case.

"We based our decision on the evidence presented and the law," Stringer said. She took no questions.

Prosecutors introduced evidence at trial that Hernandez got a tattoo that memorialized the double slaying. California tattoo artist David Nelson testified that Hernandez requested an image of a revolver with the gun barrel facing forward. Hernandez wanted five bullets visible in the cylinder of the gun and one cylinder empty, Nelson said.

Hernandez, 27, grew up in Bristol, Connecticut, and played for the Patriots from 2010 to 2012. About six weeks after Furtado and de Abreu were killed, Hernandez signed a five-year, $40 million contract with the Patriots and went on to play another season before Lloyd was killed. He was cut from the team shortly after he was arrested in Lloyd's killing in June 2013. He was not charged in the 2012 killings until 2014.

Hernandez's defense team in the double-murder trial included Jose Baez, known for winning an acquittal for Florida mom Casey Anthony in the death of her daughter. Baez wasn't in court Friday; Sullivan said he was dealing with a medical issue.
----------
Send a breaking news alert to Action News
Report a correction or typo