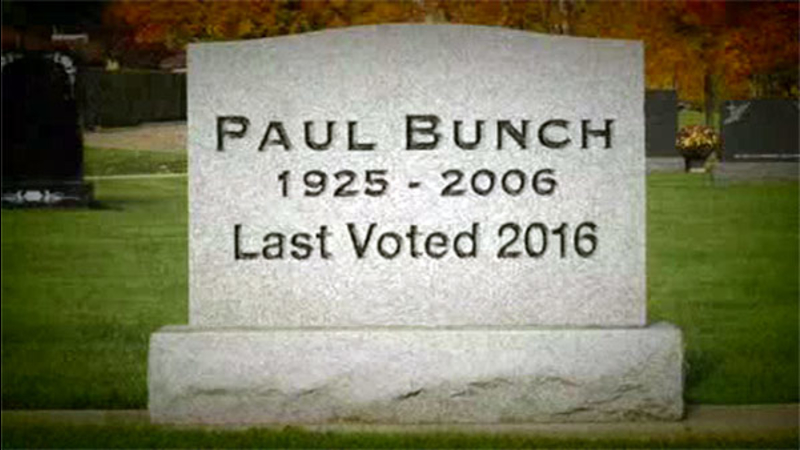 VIDEO: Voting from the Grave

PHILADELPHIA (WPVI) -- The key to one of the most contentious presidential elections in history could be right here in the Keystone state.

Republican candidate Donald Trump has made allegations of fraud at polls in the City of Philadelphia.

So, Action News dug through a decade's worth of election and death records to see if there was any truth to the claim.

Some of what Action News investigation found was stunning.

Rita A. Pezzano, who passed a decade ago, was found listed as an active voter. Her daughter-in-law was shocked when we shared the news.

"I was about seven months pregnant when she died," said Audrey Marchiano.

"So she has been dead about 10 years now?" asked Investigative Reporter Wendy Saltzman.

Wendy Saltzman asked Marchiano if there was any way Pezzano could have voted in 2016.

"Not if she was dead," Marchiano replied. "So no."

Our investigation also found Joseph B. Haggarty resting peacefully in a Bucks County cemetery. His grave marker confirmed he died in 2010, but records show he voted five years after his death.

"Any chance he voted in 2015?" Wendy Saltzman asked a neighbor.

Action News also found Paul Bunch, who died in 2006, also cast a vote in this year's primary which was nearly ten years after death records show he died.

"I believe so. It sounds like it, unless he is coming back from the dead," he said.

Action News also visited the former neighborhood of Concetta Gallara. Records show she died in 2009, but voted in 2013.

When asked if there was a way Gallara could have voted, her former neighbor Jeanie Pizzo told Saltzman, "I don't know, it's awfully funny. Unless a dead person came out of their grave."

Action News took our findings to election watchdog, The Committee of Seventy.

President and CEO David Thornburgh said, "There's going to be some error and some level of petty fraud and we should have no tolerance for that."

We also asked Philadelphia City Commissioner Al Schmidt, who is a Republican, about our findings. His office is in charge of overseeing Philadelphia's elections.

"It is certainly an irregularity, there is no doubt about that," Schmidt said.

Commissioner Schmidt's office also checked some of the names Action News provided them. Schmidt said in the small sample-check he did, his office found no clear evidence of fraud.

"We do have one guy that is questionable, definitely," he added.

Schmidt also said that most of the issues he found would be considered human error. He cited things like poll workers scanning the wrong name, a person who would have signed in the wrong spot, or a son with the same name who may have voted in his dead father's place instead of his own.

Saltzman also asked Schmidt about how people like Timothy Turner could still be an active voter in Philadelphia.

"Timothy Turner died in 2006. How is he still on the voter roles for somebody to vote in his place in 2016?" asked Saltzman.

"He would be removed if the Department of Health knew about it at the state level and then the state notifies us," Schmidt said.

Schmidt also said deceased voters would remain on the election rolls if Philadelphia County wasn't informed of their death.

We told Turner's son about his father's "vote from the grave". He told Saltzman he wasn't happy about it.

"I figure whoever is running the voter registration ain't doing their job, for them to still have my father's name and for him to have been deceased for 10 years," said Darryl Turner.

The Committee of Seventy also cautions that intentional fraud is a tiny fraction of the one million votes cast in the City of Philadelphia.

Thornburgh and Schmidt both agreed that the number of inaccuracies uncovered by Action News couldn't sway the election.

Saltzman asked if it could however fuel critic's questions on the legitimacy of Philadelphia's voting process.

"Doesn't that open up the voter rolls to the possibility of fraud?" Saltzman asked Schmidt.

"It definitely makes it so that there is an opportunity for it," Schmidt replied.

Schmidt also said the dead voters we uncovered will be removed from the rolls.

Department of State Statement:
"The Department of State is committed to assisting the counties in maintaining the most accurate and up-to-date voter rolls possible. The Department supports all 67 counties in completing the annual list maintenance activities to address voters who have moved. We provide the counties lists of voters who have died several times per month."
"The Department was unable to verify the data comparison provided by ABC 6 because the counties keep the original polling place records that are necessary for full verification. Our understanding is that an examination of the actual records by the Commissioners' Office revealed no evidence of impropriety but rather clerical errors like voters signing the wrong line or workers scanning the wrong code inadvertently. Given the millions of votes cast in the past decade in Philadelphia, this is a very small error rate, but there is absolutely no evidence that any votes were cast illegitimately. We salute City Commissioner Al Schmidt, a Republican, for his commitment to the integrity of elections and his work to get to the truth on this matter."

Philadelphia County Board of Elections Statement:
"Philadelphia County....[is] required to use the Commonwealth of Pennsylvania's Department of Health death notifications, which are transmitted electronically the first and third weeks of each month. We only use these notifications to cancel a voter's record due to death. We also do a door canvas of those individuals who are designated as deceased, when the Election Board makes a notation in the Poll Book discrepancy sheet. If a Philadelphia registered voter dies in another state, the death certificate is issued in that State. It is my understanding that the State where the death occurred may or may not notify the State of the deceased... In the past when these incidences have been brought to our attention, the findings are always the same. Human error on the part of a Board Worker is usually the case. Especially in high turnout elections, a voter may sign in the wrong spot or a father/son, mother/daughter may sign in the wrong spot also, without the Election Board noticing or correcting the error at that time. Furthermore, when we are updating the voter histories of those who have voted in an election, our personnel use wand scanners to update the voter history. Occasionally and because of the quickness in which they are scanning the barcodes, they may scan a barcode of a voter who may not have voted; or if a voter signed in the wrong spot and our personnel do not catch the discrepancy, they erroneously scan the barcode of that voter too."

Department of Health Statement:
"The Department of Health is prohibited by the Vital Records Act of 1953 from confirming or denying the information you are looking for. Death certificates, and confirmation of that those records exist, are not subject to right to know laws. Only a legal representative of the decedent's estate; an immediate family member; an extended family member who indicates a direct relationship to the decedent; or a power of attorney can request these records, The records become public 105 years after the date of birth or 50 years after the date of death of the individual. As I noted earlier, validated records are sent to local, state (including PennDot, and Department of State) and federal agencies on a monthly basis. DOH has been releasing current death information to the Department of State (DOS) in order to satisfy their data needs and meet the DOH legal requirement to share data with DOS. The releases have occurred twice a month, on the first and third Tuesday of each month. In addition to these regularly scheduled updates DOH created special data programs that allow us to provide an entire year's worth of death information to DOS to assist them in achieving their goals leading up to primary and special election periods. We have performed three special data runs (October 2014, March 2015, and August 2015) each at the request of DOS."
Related topics:
politicsphiladelphia news2016 electionaction news investigation
Copyright © 2022 WPVI-TV. All Rights Reserved.
TOP STORIES
AccuWeather: Threat For T'Storms Saturday
Locals prepare for July 4 weekend in Philly
Holiday weekend festivities begin early down the Jersey Shore
Officials: 2-alarm fire leaves firefighter, person injured in Montco
Man charged with first-degree murder in Delco road rage shooting
Experts predict large volume of travelers for July 4 weekend
Troubleshooters: PGW to reverse Weather Normalization Adjustment
Show More
Philadelphia area July 4th fireworks list for 2022
Del. state auditor acquitted of felony charges, guilty of misconduct
Officials: Man, 24, killed after shooting in West Kensington
DA: Officers justified shooting armed man in Hatfield Twp.
Artwork sought for display in Cause Village at "Made in America"
More TOP STORIES News