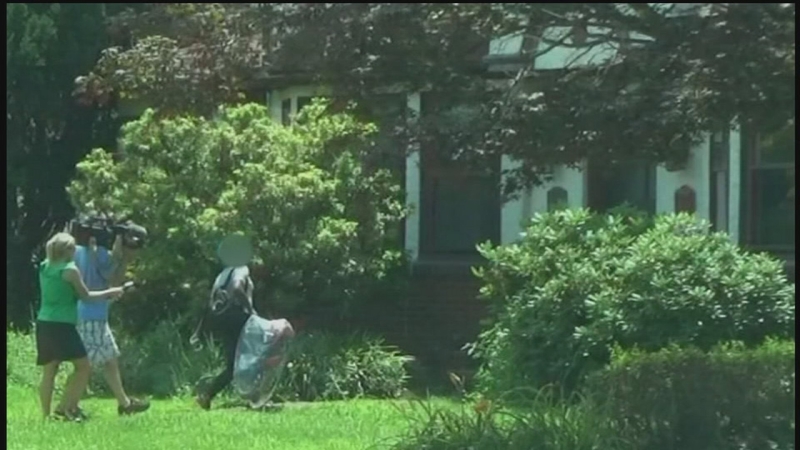 NORTHWOOD (WPVI) -- Countless homes across Philadelphia have been stolen for months at time, taken over by squatters who refuse to leave.

And the frightening thing is lawmakers warn this could happen to anyone who leaves their home vacant, even for a short amount of time.

These groups of criminals break into houses and some even try to extort owners for money in a scheme called "Cash for Keys."

Action News Troubleshooters tracked down a squatter who fesses up to her illegal involvement and explains just how easy it is for squatters to take over your home.

"If y'all want us to leave now, you have to give us something," says a masked woman in our undercover video.

The woman behind this mask is Taniesha Diaz, hiding her face after Action News busted her and others living illegally in a Northwood home.

The four bedroom, two bath property has been owned by Matthew Waychoff for 10 years.

That makes it the perfect place for squatters to move in. Waychoff says neighbors frantically called on him in the middle of the night saying burglars had broken in.

He says the squatters showed police a fake lease and officers refused to throw them out.

"There's no other way to say it, but that is completely criminal," he said.

Waychoff says the group later asked him for money, saying if he paid them cash, they'd turn over his keys.

"I was thinking in my head that I'm not going to negotiate with a terrorist," he tells Action News Troubleshooters.

"I mean you can imagine that that's what we're getting to in Philadelphia, where someone burglarizes your home and decides to stay," said Representative John Taylor. "It's a criminal enterprise. They did it to Matt and they could do it to anybody else."

"We might be going into an area of lawlessness," said Councilman Al Taubenberger.

They say once squatters show a fake lease, police are all too often siding with the criminals and passing the buck, saying the homeowners need to hash it out in court.

"The police don't seem to be reacting in a proper way and that isn't right," said Taubenberger.

In a video on Diaz's Facebook page, she brags about her new home, with the front door lock drilled and missing.

The squatters, who Waychoff says changed the locks multiple times, moved furniture, clothes, an air conditioner and even a puppy into Waychoff's home, were thrown out by police for allegedly stealing electricity.

There are 50 to 80 other homes in Northeast Philly, according to Realtor Michal Galdi, that he says have been snatched up by squatters.

Action News knocked on the front door of one of these homes to ask these squatters about their living situatiion.

"Nobody came here and told you that you shouldn't be here?" we asked. The squatter said no.

"They could do it if you leave your house for a month and go on vacation somewhere," said Galdi.

Down the street near another home occupied by squatters who refused to speak with us, we caught back up with Taniesha Diaz.

"It was somebody else's house, but it was for the kids. I thought we was going to move somewhere, it was for the kids, so people wouldn't be homeless," she said. Adding, "It's all over the place. They doing it everywhere you go."

So why not them? She said these houses lay vacant and if the squatters want them bad enough, they will find a way in. It doesn't even matter if you change the locks.

Diaz says squatters justify their actions, most often targeting bank owned homes and says their families might otherwise be homeless.

But we confronted her with information on her Facebook page, swimming in a pool and partying with friends in a week-long vacation to Miami.

So how could she afford to go to Miami, but claim she was nearly homeless and squatting in Waychoff's house?

Councilman Taubenberger and Representative Taylor are now investigating ways to change the laws to crack down on illegal squatting.

The best way to protect yourself is by having an alarm, never keeping a property vacant for too long, or advertising it's not occupied when you're away for an extended period of time or selling your home.