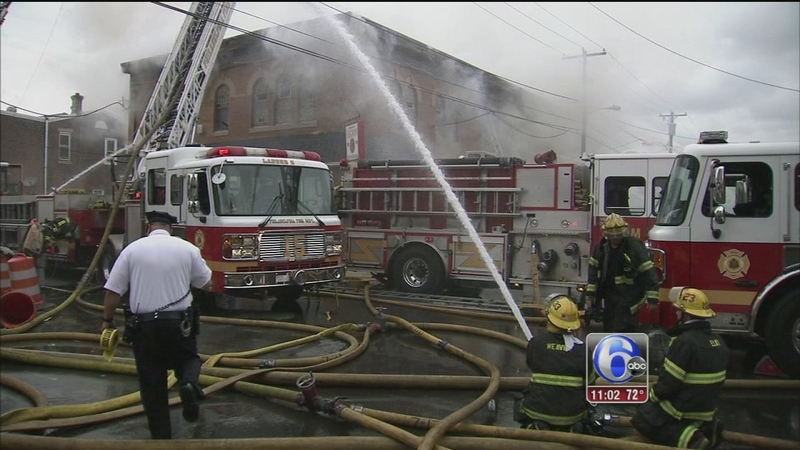 Flames were first reported shortly after 2 p.m. Monday at American Legion Post 396 on the 2300 block of Orthodox Street.

A 10-year-old Action News viewer captured video of the huge inferno that destroyed the two story brick building - flames fueled by a lot of wooden material inside the structure.

About 20 to 30 veterans and their families were wrapping up a Memorial Day banquet when somebody noticed smoke.

John Clark is the Junior Vice Commander of Post 396. He explains, "We have a dumbwaiter at the end of the bar, and somebody said, 'There's smoke coming out of the dumbwaiter.' So, my son-in-law ran upstairs, and here in the attic upstairs a motor had caught fire, and I guess that had started the whole thing. It started out as a little tiny fire."

Within minutes, the fire went to four alarms with over 100 firefighters ultimately battling the blaze.

Fire Commissioner Adam Thiel says, "It's very difficult when you can't get in there, what you call an, 'exterior attack'. You honestly can't get in and find the fire. That's why we're gonna be here for a while."

It took firefighters over two and a half hours to finally bring the inferno under control. They also managed to save two homes, which had to be evacuated temporarily.

As for the American Legion post, John Clark says, "I guess the building's done now. I mean, we've been there for 98 years, for crying out loud... It was a great post."

Asides from the veterans, it would also prove to be a very sad day for many families in the neighborhood.

Firefighters will remain on the scene to keep an eye on hot spots through the night.