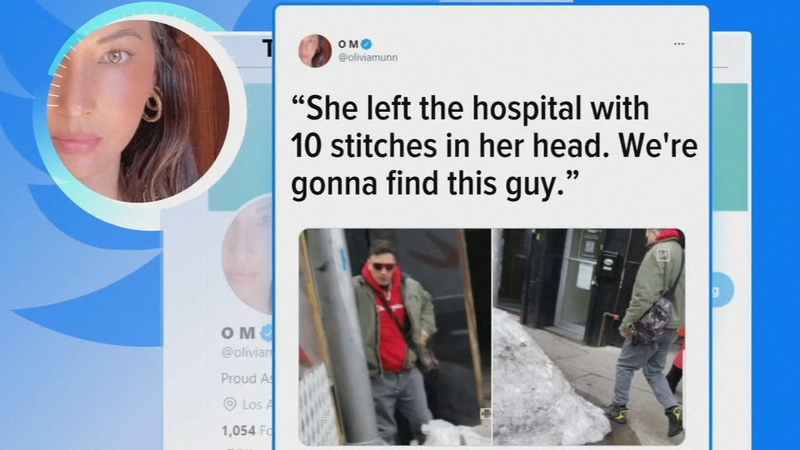 NEW YORK CITY -- A man has been arrested for allegedly attacking a Chinese woman in New York after actress Olivia Munn helped call public attention to the crime.

The Asian-American community is celebrating the swift arrest of the man wanted the attack outside a bakery in New York.

The victim's daughter, Maggie Cheng, was relieved to see the suspect was caught.

"This is like a perfect example of everyone coming together for a greater good," Maggie Cheng said.

The case gained widespread attention on social media after actress Olivia Munn, who is a friend of the victim's son, posted about the incident on social media.

Munn wrote in her tweet, "She left the hospital with 10 stitches in her head. We're gonna find this guy."

"It's an incredible feeling to have social media, NYPD, everyone mobilized for us and they mobilized fast," Munn said. "And that was such a great feeling to know that our pain, our suffering, our mothers matter."

According to court documents, the suspect, identified as 47-year-old Patrick Mateo, told the arresting officer "he knew why the police were there because someone had sent him the pictures from social media."

Actress Oliva Munn credited the NYPD and "everyone on social media who cared" with identifying the suspect who shoved her friend's mother during an assault at a Queens bakery earlier this week.

Mateo was charged with third-degree assault and second-degree harassment. He has pleaded not guilty.

The attack is not being investigated as a hate crime. The victim's son, Sam Cheng, said that is one of the reasons he is speaking out, so people understand the difference.

"It could be down to words that were said. And you need to proof of that. Without it, it's just assault," Sam Cheng said. "And I wonder how many more other crimes out there that they legally can't be called a hate crime? Just want to spread the awareness there."

Surveillance video shows the violent attack outside a bakery in Queens.

The incident happened just before 2 p.m. Tuesday in Queens, where authorities say the suspect began screaming at the 52-year-old victim and threw a box of spoons at her.

"Get the (expletive) out of my way," he allegedly said before pushing her to the ground.

She fell and hit her head against a newsstand box and was rushed to the hospital in stable condition.

The criminal complaint said she lost consciousness, and Sam Cheng said his mother needed about 10 stitches to close the gash down her forehead.

"She is still in shock, she's glad she's still alive," he said. "She's happy that she came out with a pretty gnarly injury, but not enough to the point where it's disabling her."
Witnesses said the suspect was cursing at the victim moments before the shove.

"The guy just peeped out of the coffee shop, and he goes, 'I'll eff you up,'" witness Derrick Chan said. "And then all of a sudden, he comes out and tosses a box of spoons at her. And then just does a football sack and pushed her to the ground."

The incident in Queens was just the latest in a string of violent crimes against Asian-Americans in recent weeks.

"Well, as an Asian-American, I have been well aware for many, many years of the physical and verbal racist attacks that my community goes through, but especially over this past year, it's increased astronomically," Munn said.

Munn, along with stars of the film 'Crazy Rich Asians' Gemma Chan and Awkwafina and television show 'Hawaii Five-O' star Daniel Dae Kim, have been outspoken against the violence.

"These are people who are elderly, often with pre-existing conditions, who are already afraid to go outside and now they're fearing for their lives," Kim said.