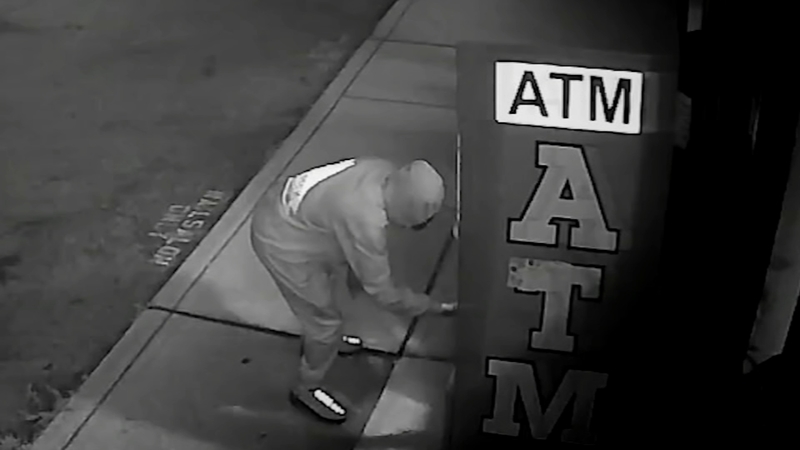 PHILADELPHIA (WPVI) -- Authorities say at least one person has been arrested in connection with a series of ATM explosions across the area.

The latest explosion occurred just west of the city in nearby Drexel Hill.

Surveillance video shows a man lighting an explosive and blowing up an ATM along Township Line Road and Drexel Avenue just after 7 a.m.

Officials said at least four other ATMs were targeted overnight, including one outside of a corner deli at 26th and Brown Street in the city's Fairmount section.

The explosion there happened around 11 p.m. on Tuesday. Police said they found parts of the machine a few blocks away.

About an hour later, another ATM exploded on the 6600 block of Dicks Avenue, in Southwest Philadelphia.

The Action Cam was also in Brewerytown, just before 10 p.m. when another ATM was exploded near 29th Street and Girard Avenue.

And moments later, an ATM outside a pizza shop several blocks away was damaged in North Philadelphia.

That explosion happened on the 1800 block of West Norris Street.

Outlaw says it's a dangerous crime that could leave the criminal badly injured and empty handed.

"Most of these ATMs don't have money in them. We encourage those businesses that do have these private ATMs outside of their businesses or inside to ensure the money is removed," said Outlaw.

He was busted during an undercover online investigation and police say he tried to sell the dynamite to undercover agents.

"Mr. Crump, who bragged on social medial that using dynamite was better than bullets for robbing an ATM, offered up explicit instructions on how to best set dynamite up to blow up an ATM," said Shapiro.

Since Monday night, dozens of ATMs across the city have been damaged.

Crump is now facing more charges for allegedly blowing up ATM's after authorities say they found 30 sticks of homemade dynamite in his home.