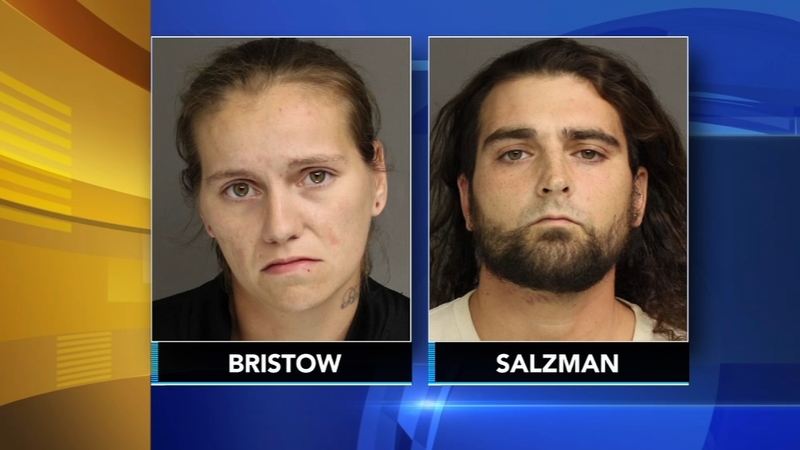 WEST FALLOWFIELD TWP., Pennsylvania (WPVI) -- The grandfather of an 11-month-old baby who overdosed on his parents' drugs said the child is recovering well at the hospital.

Chester County, Pennsylvania officials said the infant required three doses of narcan after he overdosed on heroin as his parents slept off their high in the front seat of a car Wednesday.

First responders arrived at a home on Limestone Road in West Fallowfield Township Wednesday night around 7 p.m. after a family member found the child unresponsive.

The child's grandfather said the couple came over for dinner when he found them in the car.

Police said they interviewed the child's parents, Kristen Bristow and Charles Salzman, Jr., and found they had ingested heroin and fell asleep in their car along with their child as they were parked behind the house.

According to officials, after the parents fell asleep the 11-month-old child found and ingested heroin while seated inside the vehicle.

Troopers from the Avondale Criminal Investigation Unit and the Forensic Services Unit responded to the scene and said they recovered numerous bags of suspected heroin/fentanyl and assorted paraphernalia from inside the family's home.

"That child was overdosing before its first birthday because of the actions and addictions of the parents," said Michael Noone First Assistant District Attorney.

Noone said narcan has proven to be a life-saving tool.

"We've used that over 400 times to reverse overdoses," Noone said.

He said they're combating the epidemic from a number of angles.

"Getting people into treatment is critically important. This county has a very good handoff program where if someone experiences and overdose and then can get into treatment, hopefully to turn themselves around, and save their own life," Noone said.

Bristow and Salzman were charged with aggravated assault, endangering the welfare of children, recklessly endangering another person and related charges.