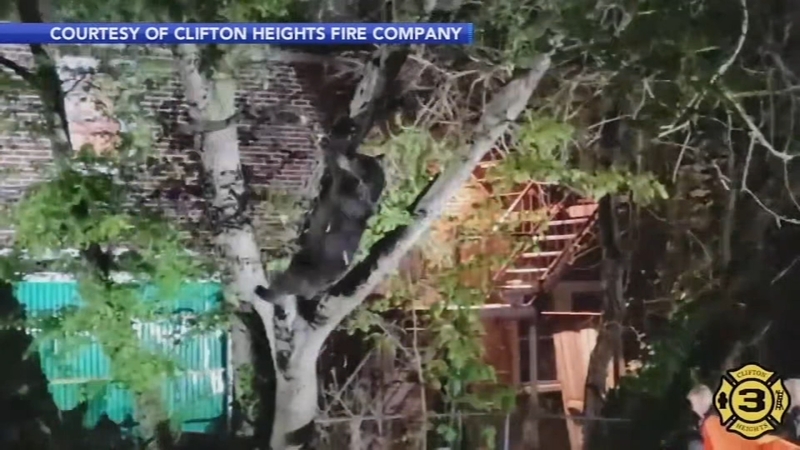 "I've been there 20 years, and there's never been a bear next door," remarked Mark Fite of Clifton Heights.

The bear was discovered in a tree next to some apartments on the 2000 block of West Baltimore Pike in Clifton Heights around 11:30 p.m on Tuesday.

Witzed says he walked by the tree with the bear in it but didn't realize it at the time.

"After thinking about it, (I) just walked past that bear, and he was probably just like 'hello,'" reflected Switz.

When Adriana Fernandez realized the bear was in the tree outside her upstairs apartment, she started recording as first responders tried to capture him.

"I came out and they were basically calling its name," laughed Fernandez.

The bear eventually made his way to the ground.

Tranquilized, he laid still as firefighters and police helped wardens carry the bear in a tarp to be moved to a safe location.

"There was probably like 30 cops for this one bear so he was like a celebrity," Switz said.

Video from the Clifton Heights Fire Company showed crews removing the tranquilized animal from a tree.

"The bear will be checked and then released in a less populated area," the fire company said.

The young male bear had been spotted in Bucks, Montgomery, and Delaware counties - creating quite a stir in every neighborhood he passed.

Now that the drugs have worn off, the Pennsylvania Game Commission is hoping jelly donuts will help capture the bear.

The bear initially was spotted in Doylestown at the end of last week and made his way through Montgomery County only to appear again Tuesday morning in Lansdowne, Delaware County.

Chopper 6 spotted the bear near the Marple Avenue bridge and Baltimore Avenue in Drexel Hill at about 11:30 a.m. Tuesday.

The bear appeared to be traveling along Darby Creek.

Chopper 6 caught a black bear making itself at home Tuesday afternoon in a wooded area of Drexel Hill.

During the school day, students and staff at nearby Charles Kelly School were kept inside the building because the bear was spotted so close to the campus.
Crews managed to tranquilize the bear once, but then lost track of it.

As the day went on, the Pennsylvania Game Commission hoped jelly doughnuts left inside a large cage would lure the bear.

"We tried to tranquilize it. We got one dart in it and we can't find it. It could've gone to sleep and hunkered down on it. At this point we set a trap ... hopefully the bear will take the bait," said Pennsylvania Game Commissioner Warden Jerry Czech.

Crews managed to tranquilize the bear once, but then lost track of it.

The bear was briefly spotted by Action News crews in Drexel Hill around 11 p.m., vanishing into the night before he was eventually caught.