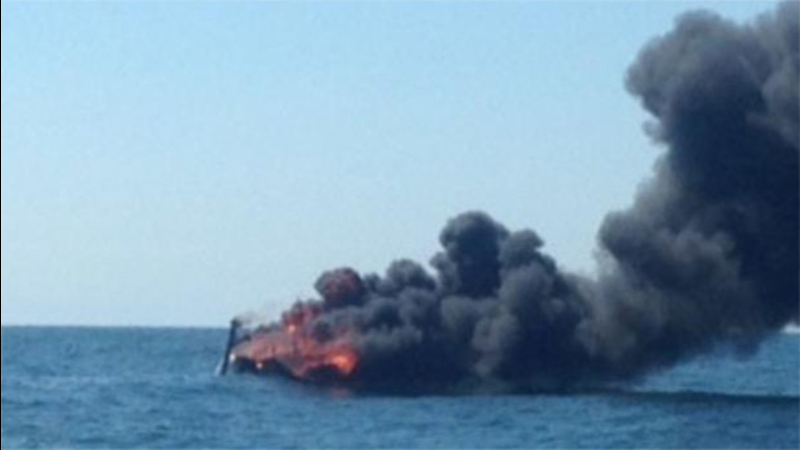 OCEAN CITY, N.J. (WPVI) -- Two people and a dog had to be rescued after their boat caught fire about three miles off the coast of Ocean City, New Jersey.

Just before 11:00 a.m. Sunday, Coast Guard officials say a fire broke out on a 46-foot sailboat near 39th Street Beach.

"We were walking down and we saw black smoke - at first we thought it was clouds," said Chrissy Gallagher.

The Gallaghers were out for a day on the beat when they quickly realized it was smoke as the vessel floated away.

"And then it came back later, then it disappeared again," said Gallagher.

Action News' Sarah Bloomquist happened to be on a nearby beach and recorded video.

Thick black smoke poured from the ship. Two people and a dog were on-board.

One person was sleeping at the time and the other was at the helm of the boat.

According to the Coast Guard, a Good Samaritan radioed for help while the three on-board jumped on a dinghy stocked with life vests.

Minutes later a 25 foot response boat arrived in time to rescue the trio.

Something is burning off the coast of Ocean City, N.J. @6abc has a crew on the way. #OceanCity pic.twitter.com/V4krwNKJji

The boats' owners were headed to Cape May after departing Barnegat Light when they smelled smoke. They tried to extinguish the fire before calling mayday.

The boat, which sank, wasn't able to be salvaged.

Originally from Florida, the couple and their dog lived on the boat and lost everything.

The Ocean County Police Department helped them get a rental car and they plan to stay with family.

As for the cause of the fire, it remains under investigation.