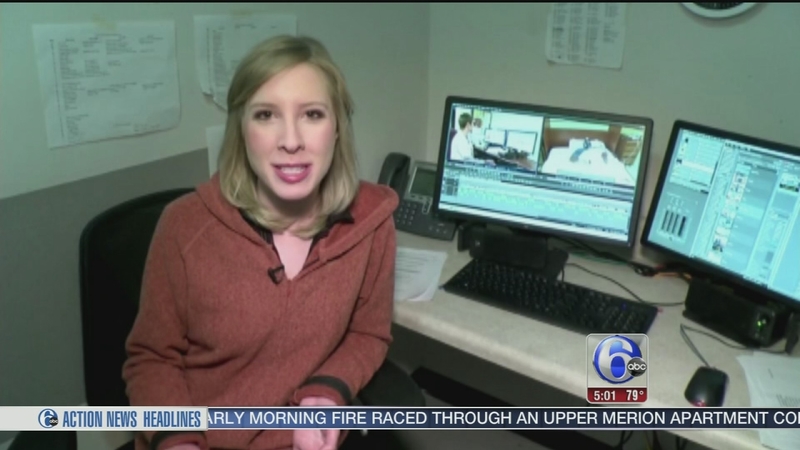 PHILADELPHIA (WPVI) -- The TV news reporter and photographer who were killed in a shooting on Wednesday morning in Virginia have ties to our area.

24-year-old Alison Parker and 27-year-old Adam Ward, from WDBJ-TV, were shot and killed during live report by a former worker at that station. That man, Vester Flanagan - who used the name Bryce Williams while on-air, later shot and killed himself.

Ward's fiance is Melissa Ott from Gibbstown, Gloucester County. She was the producer for WDBJ's morning show and, in a heart-breaking twist, watched the shooting as it happened.

Alison Parker, meanwhile, was in a relationship with Chris Hurst, who anchors WDBJ's 11pm news. Hurst is from Philadelphia.

On Twitter Wednesday, Hurst expressed his affection for Parker:

We didn't share this publicly, but @AParkerWDBJ7 and I were very much in love. We just moved in together. I am numb. pic.twitter.com/tUrHVwAXcN

We were together almost nine months. It was the best nine months of our lives. We wanted to get married.We just celebrated her 24th birthday

She was the most radiant woman I ever met. And for some reason she loved me back. She loved her family, her parents and her brother.

Andy Parker told The Washington Post that his wife first learned of the shooting in a text message from WDBJ-TV. He says they did not know her condition at first but feared the worst when they didn't hear from her.

Andy Parker says she would have called immediately to say she was OK. About an hour after the shooting, a senior manager at the station called the family to say Alison Parker had been killed.

Parker and Ward were a young team at the beginning of their careers.

Parker was chasing her dream in TV news. Ward had been with WDBJ for several years, starting off in the production department and moving to videographer. The pair often posted photos on social media of themselves working together on assignments.

Just hanging out in the newsroom with @jdashiell and Photographer Adam Ward! pic.twitter.com/lyW9cCZ99G

Parker as hired at WDBJ full-time just over a year ago, said Jeffrey Marks, the station's general manager.

She grew up in Martinsville, Va., and attended James Madison University.

Ward grew up in Salem and attended Virginia Tech.

"Adam was a capable photographer who would go the extra mile to get the job done," WDBJ journalist Joe Dashiell wrote.

Colleagues and the competition described both as dedicated journalists.

"She was bubbly and outgoing," said Eric Johnson, a photo journalist at WSLS of Roanoke.

Johnson would run into the pair during early morning breaking news stories.

"He was always very professional but down to earth and always had a winning smile," Johnson said.

About 50 people work at WDBJ, and Marks said "it's the kind of place where it's all brothers and sisters."