'It's not about you': Driver Bubba Wallace proud of NASCAR's decision to ban Confederate flags from races 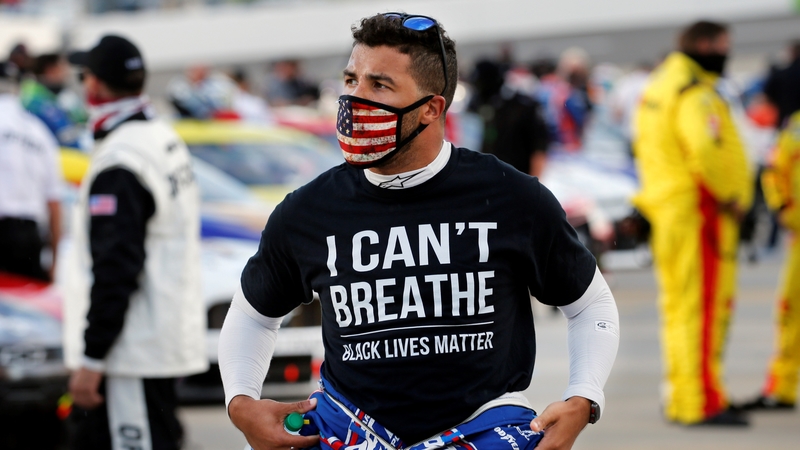 NASCAR Driver Bubba Wallace said he was "really proud" with the company's decision to ban Confederate flags, a controversial decision from a sport deeply rooted in southern culture.

The ban, announced on Wednesday, came before a scheduled race in Martinsville, Va. where Wallace's No. 43 Chevrolet car had a #BlackLivesMatter paint scheme and the driver was seen wearing an "I can't breathe" shirt. Wallace asked NASCAR to condemn the flag earlier this week, saying there was "no place" for them in the sport. Wallace, 26, is NASCAR's lone black driver.

The flag is now banished at all NASCAR events and properties weeks after the death of George Floyd and ensuing anguish. Flags are often seen on the infield and in parking lots at tracks.

"Just really proud of the efforts of NASCAR for stepping up and wanting to, you know, be a part of change," Wallace said in an interview with Good Morning America on Thursday. "I know it's tough, they're in a tough situation. They've been in a tough situation for a long time now but I think this is the most crucial time and a time is of the essence right now in the world that we're in and the nation that we're in to create change and create unity and come together and really try to be more inclusive."

In a statement, NASCAR said the flag's symbolism "runs contrary to our commitment to providing a welcoming and inclusive environment for all fans, our competitors and our industry."

Truck Series driver Ray Ciccarelli posted on Facebook he would quit the sport, writing: "I could care less about the Confederate Flag but there are ppl that do and it doesn't make them a racist."

NASCAR helmet artist Jason Beam tweeted "ignorance wins again, NASCAR you realize the North had slaves too, lol not just the South, you want to remove the American Flag as well, idiots." And a publicist for one NASCAR driver tweeted the decision was "a joke."

When asked about fans who may be unhappy with the ruling, Wallace praised the choice, saying "there's no good that comes with that flag." Wallace asked fans to take a broader look at the world and consider those going through adversity.

"We live in a very selfish world. I am selfish myself and this is so much more than about ourselves. This is about our brothers and sisters that are suffering through a lot and, you look at the confederate flag and how, yes, it may mean heritage to most, but to a group that is in a lot of pain right now, the African-American community is in a lot of pain. That's a symbol of hate and it brings back so many bad memories. Signs of oppression from way back when and it just -- there's no good that comes with that flag. And that's the message we're trying to get across. It's not about you. It's about a group of people that we are trying to bring together and make this world a better place for."