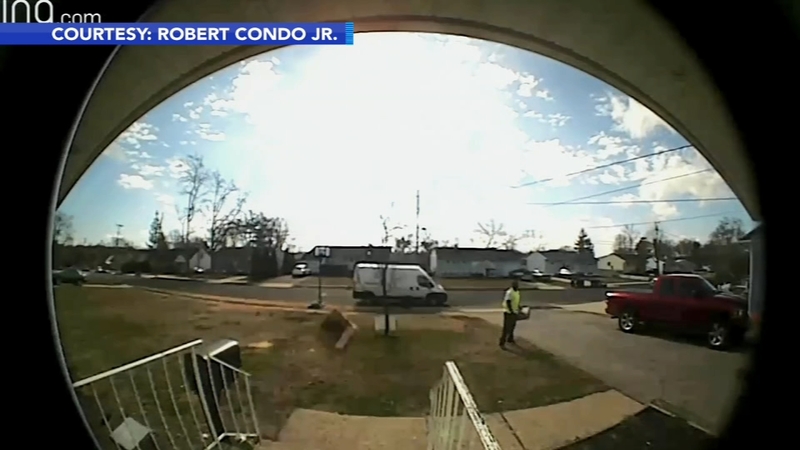 DEPTFORD TWP., N.J. (WPVI) -- When you order something from Amazon, it's boxed up and shipped out with care. But in some cases, that consideration stops on the assembly line.

Both videos would make any homeowner furious.

In the first video you can see the driver, contracted with Amazon, toss a package with complete disregard instead of properly placing it at the customer's door.

Robert Condo is that Amazon customer, and he shared this video with Action News. He says he was disgusted by what he saw.

"I just think you should take a little more pride in your job, and especially when you are delivering people's personal items and property," Condo said. "You don't want to just throw it. It is kind of disrespectful to people just tossing their items around because they don't really know what is in that box."

Condo posted the video online and says he quickly discovered other neighbors in his Deptford Township, New Jersey community had similar encounters.

"I think (the video) is over 10,000 views now and a lot of comments of people getting things thrown and broken and other videos were posted. So, it is obviously a common thing that these drivers are doing," he said.

His mother, Denise Condo, lives right next door and had a delivery on the same day. She says the driver repeated his tossing theme with her package.

"I said I can't believe he threw that package there because I hope it wasn't breakable," Denise said.

Another Action News viewer from Delaware County, in the Prospect Park area, posted video of another Amazon contracted driver caught in the act, using a package like a baseball and chucking it at her door. The package never makes it to the porch and lands in the grass.

None of the items had any major damage and the customers tell us Amazon responded quickly and credited their accounts. But they are hoping the driver faces some disciplinary action.

In a statement Amazon says:

"We have high standards for our delivery partners and expect every package to be handled with care. We are investigating and will work with the customer directly on this matter."

Condo hopes this a wakeup call to delivery drivers and he has some advice.

"Just remember, you are always being watched - and be professional," he said.