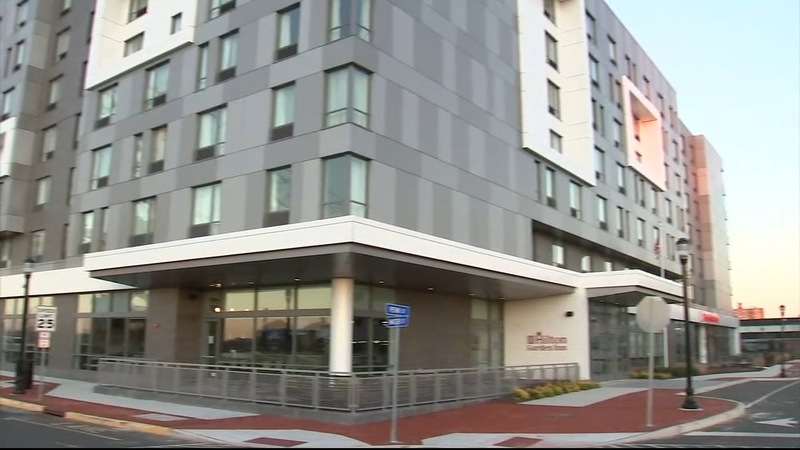 CAMDEN, New Jersey (WPVI) -- The Hilton Garden Inn is the first major hotel to open in over five decades in a city that once had a reputation for high crime and unemployment.

Now, they're hiring local residents - all in the middle of a pandemic.

For Maria Zambrana, it's her first week at a new job after nine months out of work.

"Before, I worked at the DoubleTree Hotel," said Zamabrana. "They closed for the pandemic. I had been working 19 years in that place."

While the hospitality industry across the country—including Philadelphia— is struggling during the pandemic. Across the river in Camden, they’re working to build up that sector, hiring local residents as the City prepares for its first new hotel in over 50 years @6abc pic.twitter.com/wxcZXnBQK3

Zambrana is one of the local staffers who make up 40% of those employed by the new hotel that's set to open Friday along the Camden waterfront.

"We're in the very beginning stages of building a robust hospitality sector," said Kris Kolluri, the president and CEO of Cooper's Ferry Partnership.

"The pandemic has really impacted communities of color more than other communities," said Kolluri. "To see a business open and engage, and hire Camden residents is one of the most gratifying and moral boosting things I can ever point to."

Days from opening Camden’s first hotel in over 50 years, the Hilton Garden Inn has over 180 guest rooms and 4500 square feet of meeting space. @6abc https://t.co/T7ZR1m3b3R pic.twitter.com/2SwICUw8F3

The real estate is nestled next to the river, the Ben Franklin Bridge and American Water's headquarters.

"It's a shot in the arm that Camden needed to support the ongoing business development and the demand for conference and meeting room space," said Dana Redd, the former mayor of Camden and current board member of Cooper's Ferry Partnership.

While the finishing touches are being finalized, this week is more than just a grand opening for Camden, it's financial stability for residents like Zamabrana during an uncertain time.