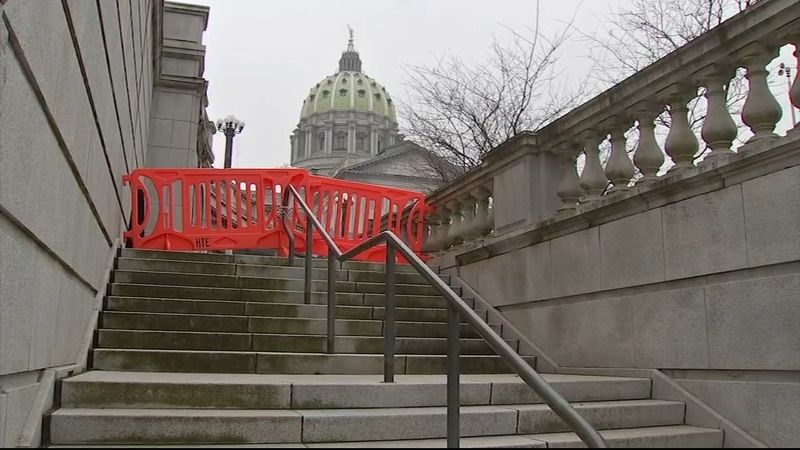 Businesses around the Capitol Complex are looking at their options after police began stepping up security.

Roxy's Diner, a staple in the Capital City, is listening to the warnings.

"We decided to be closed Sunday through Thursday to make sure everyone is safe, customers and our staff are safe," said employee Marilu Saldana.

Saldana says they are still contemplating if they will board up their windows.

Law enforcement agencies across the country are preparing for the worst-case scenarios following an FBI memo.

The memo, released this week in the wake of last Wednesday's deadly violence at the U.S. Capitol, warns of armed protests planned in all 50 state capitals from January 16 through at least Inauguration Day.

Harrisburg officials are concerned about Sunday in particular.

"FBI agents are coming to find you": Investigators have identified more than 200 suspects in their probe of the attack at the U.S. Capitol and arrested more than 100 people, FBI Director Chris Wray said in his first public appearance since the riot.

There was no heavy presence on Friday, but Capitol police were continuously circling the grounds. While we did not see heavily armed officers outside, some staffers say they did see them inside.

Barricades were up outside and Capitol police will close the complex in anticipation of riots. The Capitol was closed to the public Friday.

Staffers are off Monday for the Martin Luther King Jr. holiday and some Senate staffers were told to work remotely through Thursday because of concerns.

Dauphin County District Attorney Fran Chardo said if armed protestors do come here, there are some things they should keep in mind in regards to firearms laws - especially because Governor Tom Wolf declared a state of emergency.

"Unless the person is actively defending themselves from a real immediate threat or has a license to carry, issued by the sheriff in their own county, then they can't carry during a state of emergency," said Chardo.

He added that if the capitol is closed during the protests he will prosecute trespassers.