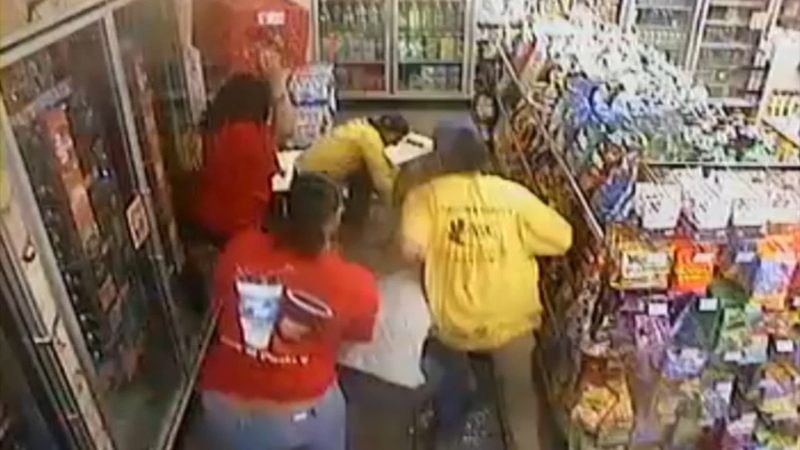 PHOENIX, Ariz. -- Customers and cashiers inside a Phoenix Circle K tackled an accused murderer and it was all caught on camera.

New dramatic video shows the Circle K busy with customers stopping in for coffee and snacks. That's when Joel McClain Carson burst through the door with a revolver, reported KNXV.

Before being shot multiple times Carson was the one wielding the gun.

"Black male gray t-shirt. Looks to be about 250. I can't tell the height. He's got a revolver in his right hand," said a man who called 911 from inside the store.

Police said the 53-year-old felon recently stole the weapon and decided to use it on May 9, 2018.

Carson can be seen on surveillance video ambushing the store and shooting Efran Hernandez in the head.

"The guy got the door blocked off, can't nobody get in," said another 911 caller.

After the gunfire chaos erupted, sending one cashier army crawling to safety.

The video also shows Carson screaming at another employee to lock the doors, then barricading them with a donut display.

He ordered the hostages to a corner and is seen a few minutes later strutting around with a soda.

That's when one brave man attacked.

Carson's gun misfired and other customers eventually joined in on the take-down.

The first hero took the revolver before all, but one employee who was hiding in a back room, ran out.

For the next 56 minutes Carson got cigarettes, drank alcohol and talked to a hostage negotiator.

Finally the SWAT team shoots what appeared to be tear gas through the window, then burst in firing shots at the suspect.

Tragically Efran hernandez didn't make it to the hospital alive.

Detectives said every bullet in the revolver had been struck but the cylinder was out of alignment so they never fired.

Carson later told police he was hoping they would kill him.