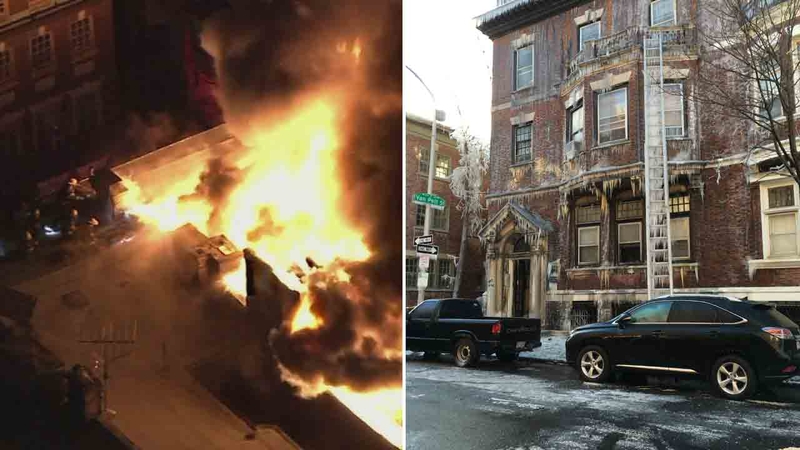 CENTER CITY (WPVI) -- Two firefighters are recovering after they were injured battling a huge apartment fire in Center City.

The building on the 2100 block of Locust Street went up in flames just after 5:30 Tuesday night. A day later, that building is encased in ice.

Icicles stretched from window ledges of the building and weighed down branches.

Nearby Van Pelt Street was frozen over, including a fire hose left behind. All evidence of the immense amounts of water that firefighters blasted on the raging fire.

The roof of the Center City building collapsed, exposing flames eating through the inside of the structure.

Seven families are now without a home as fire officials begin their investigation.

Althea Simons left with nothing but the clothes on her back when the smoke detectors blared into her first-floor unit.

She exited the building thinking it was a false alarm. 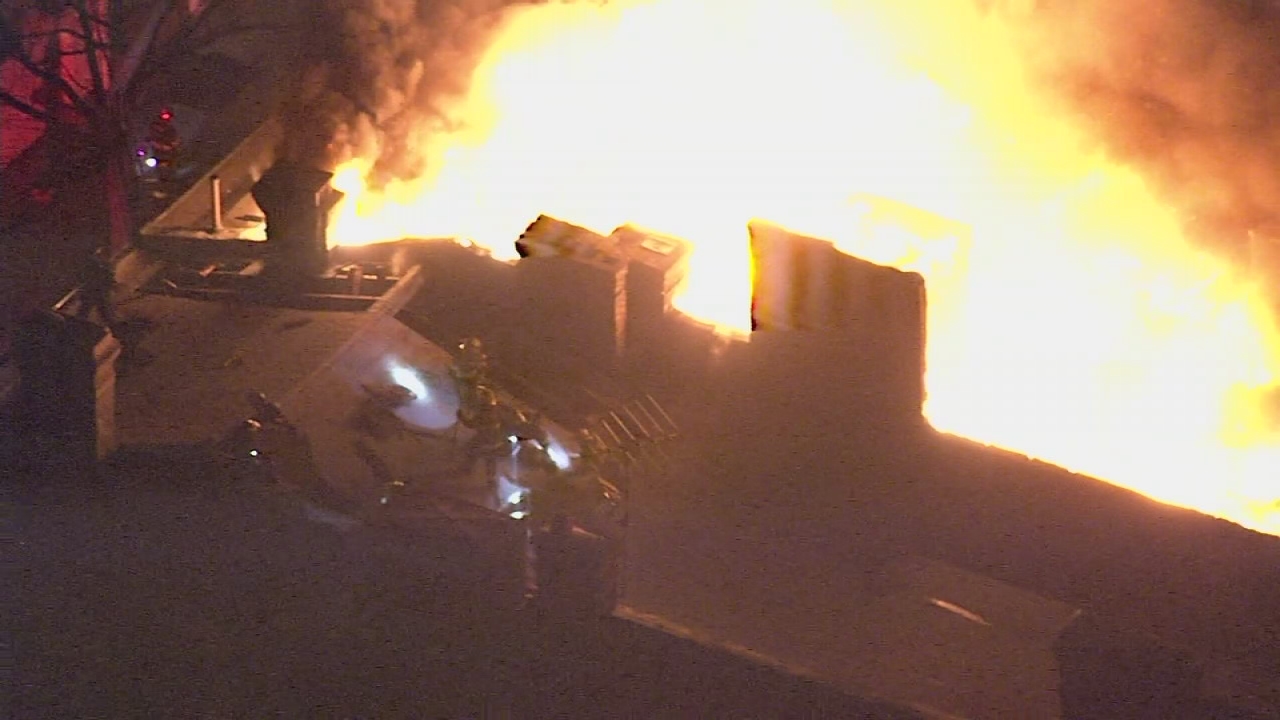 Judy Caldwell, who lives nearby, tells us, "The embers just flying from one roof to the other was really scary."

More than 100 firefighters worked to contain the blaze to the one building, where 21 of 22 units were occupied. Firefighters first contained a fire in the basement, when another was reported on the fourth floor.

Chris Molinari, who lives on the basement floor, says, "When we were leaving the apartment, it was just everywhere. It was just really thick, it was on all the floors; we were really scared and had to get out."

Firefighters had to contend with the bitter temperatures and a partial collapse. Two of them were taken to the hospital with minor injuries.

Caldwell commended the firefighters, saying, "I was just marveled by the firemen. Their care and concern for everybody was immense."

Licenses and Inspections Commissioner David Perri tells us, "We've determined the building to be imminently dangerous. There is a certain amount of demolition work that will need to occur."

The belief is that the building is not safe enough to allow fire investigators to freely work inside.

Perri says, "The building is in a dangerous condition and there's no reason for those folks to risk their lives."

The first phase is to stabilize the building so fire investigators can finish their job. When that is done, a second evaluation will be conducted to make sure the weakened structure can safely take the weight of any snow that might fall this weekend.

As to the origin of Tuesday night's blaze, there was heavy fire in the basement and the top floor. There's the possibility it was two separate fires. But Fire Commissioner Derrick Sawyer suggests flames from the basement may have raced up in a wall cavity.

It's not clear when or even if residents of the burned building will be able to go in to collect any belongings.

"I don't know when we're going to get in, and if we are ever. I mean it's probably destroyed," said Simons.

In addition, next door residents like Joe Duff's niece are also out of their units.

"They told her come back tomorrow and try to get her stuff," said Duff. "She just wants her passport and her wallet."

Chopper 6 over the scene of a Center City apartment building fire.

One bright spot in all this tragic incident - a rescue volunteer, who was briefly allowed inside, was able to reunite Ajax, a cat, with his grateful owners.

"She was in the first-floor, front apartment of the building next door so a little bit of water damage, a little bit of smoky haze, but it wasn't bad at all," said Jen Leary of Red Paw. "She was inside a closet so she was safe."

Chopper 6 over the scene of a fire in Center City.

My thoughts are with all those displaced in tonight's fires. We will work with you as you move though this difficult time.