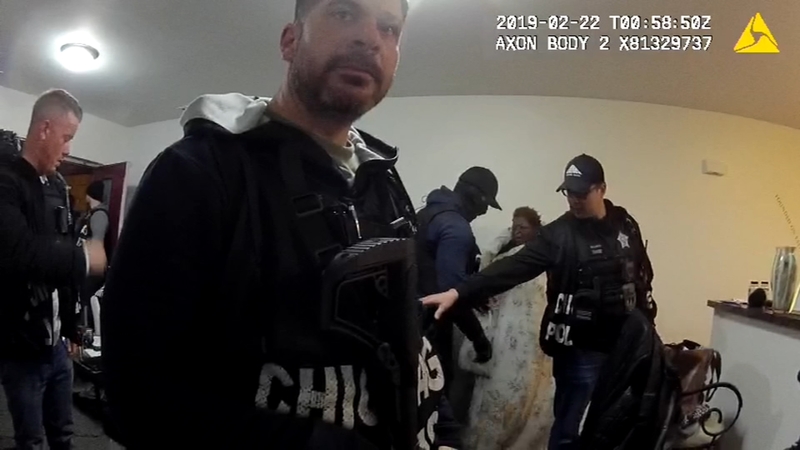 CHICAGO -- An investigation has been launched into a raid of a Chicago woman's apartment that resulted in armed police officers drawing their weapons and handcuffing an innocent woman in February 2019.

Anjanette Young, a social worker, was changing her clothes after coming home from work when officers raided her apartment. Chicago police body camera video footage showed officers with their guns drawn and handcuffing her while she was naked. After about two minutes, police covered Young with a blanket.

"To have to deal with police officers yelling at me, pointing guns at me. No one should have to experience that," Young said during a press conference Wednesday. "I don't believe it's fair that the city has spent the last two years telling me that they did nothing wrong."

The footage was made public this week. Young's attorney said the city initially tried to block his client from obtaining the video.

Raiding wrong addresses has cost the city lots of money in legal fees settlements and good will.

"The reason they say they denied the FOIA request is because there was an ongoing investigation," Keenan Saulter, Young's attorney, told our sister station WLS. "This isn't about a protective order. This is about a cover-up."

"I have an obligation to make that wrong right," Lightfoot said. It's been painful, painful and upsetting."
Brown said the Chicago Police Department will review its policies on warrants in January to include a revision that if the wrong home is raided, there will be a claim notification to create a record of what happened during the event.

"No-knock warrants will only be approved if there is a danger to life and safety that has been articulated clearly," Brown said. "We need to ensure that this never happens again with reformed policies, procedures and accountability."

The Civilian Office of Police Accountability in Chicago said it has been investigating Young's incident for about a year, WLS reported. The mayor has ordered a full release of all body camera video from that night and is asking for state lawmakers to look into how body camera video is governed in Chicago.

Saulter said they will pursue legal action and file a suit against both the city and the Chicago Police Department in the coming days.

Chicago Mayor Lori Lightfoot is vowing change after bodycam video of a Chicago police raid on the wrong house was released, even as city legal officials tried to suppress it.