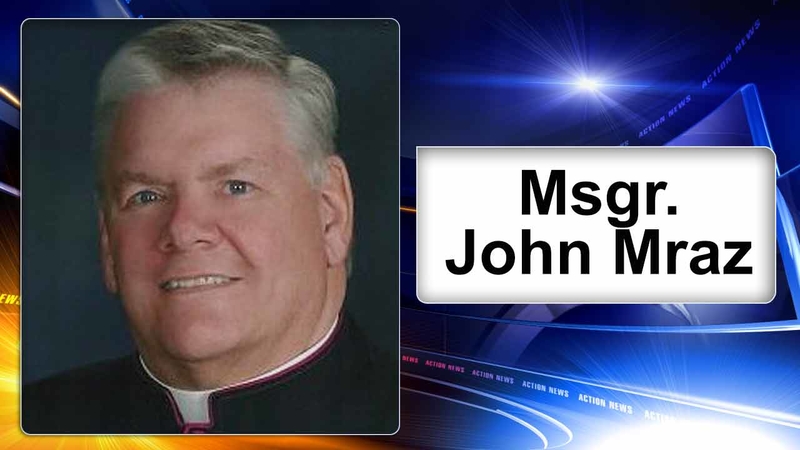 ALLENTOWN, Pa. (WPVI) -- A priest from Lehigh County has been charged with sexual abuse related to possession of child pornography.

According to the Lehigh County district attorney, Mraz came to the attention of investigators earlier this summer, after he asked a friend and parishioner to update two laptop computers.

That person found sexually explicit images of underage boys on both laptops, prosecutors say, and alerted officials from Diocese of Allentown, who passed on the information to the district attorney.

An investigation revealed that Mraz had searched for and downloaded multiple pornographic images of underage boys on multiple devices, prosecutors said.
"As of a result of that analysis, it is alleged the user of the devices actively searched the internet for images and videos of underage males engaged in sex acts," Lehigh County District Attorney James Martin said.

Mraz, who currently lives at a retirement home for priests in Bethlehem, was arrested Tuesday and charged with Sexual Abuse of Children and Criminal Use of Communication Facility, both third degree felonies; and Obscene and Other Sexual Materials and Performances, a first degree misdemeanor.

"I would ask that people not rush to judgement, oft times they do in these situations with the Catholic Church and things that have happened in the past," defense attorney John Waldron said.

"It's a school, all these kids are twelve years old at the most," Davis said.

Some parents want the Church hierarchy to investigate to make sure there had been no inappropriate contact between the defendant and kids.

"Absolutely. With the right person to do it the right, to approach kids the right away, especially young kids," parent Kristin Albright said.

Earlier, the DA emphasized there is no evidence of any improper contact with children.

"That is correct. This is a pornography case at this juncture and I hope it will continue to be just that," Martin said.

But when asked if parents should be worried, he paused, then said, "Certainly if there was any evidence of that or any concerns I would encourage people to come forward and report them to us."