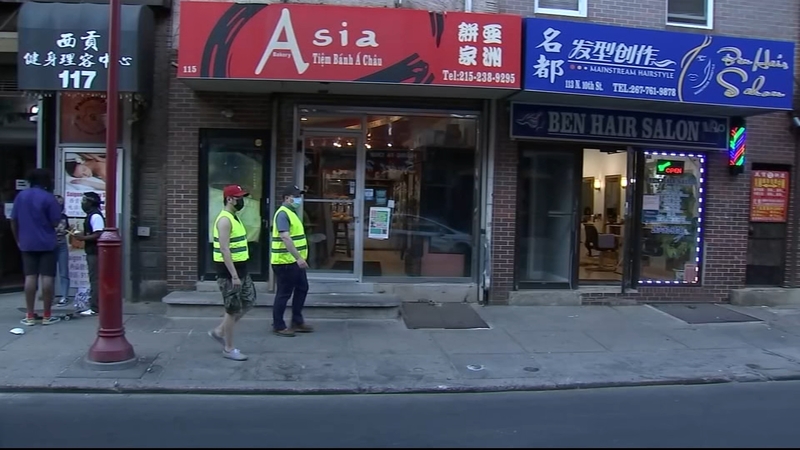 Eric Law is a Chinatown Safety Ambassador. Thursday was his second night walking his neighborhood along 10th and Arch streets.

Right now there are about a dozen volunteers. Law is teamed up with Abe Summers.

It’s a community led effort to provide extra eyes and ears in Chinatown. The Chinatown Safety Ambassadors— a volunteer patrol that’s formed in response to attacks across the country against Asian Americans, escalated by the pandemic. @6abc pic.twitter.com/CpTu16WQZF

"This is an issue that concerns many of the people, and you want to show your kids that you're stepping up," said Summers.

"It's basically observing, watching and being visible," said Harry Leong, coordinator for the Chinatown Safety Ambassadors.

"It's ownership, it's ownership," said Leong of the program's importance. "If we don't have these types of grassroots, people taking on these responsibilities -- we don't expect the city to do it."

A newly formed safety ambassador program in Chinatown is made up volunteers aimed at being an extra set of eyes and ears for a community that wants to feel safe. @6abc https://t.co/AGgkxVoDbW pic.twitter.com/rPyxfkqm1t

Other community organizations are even holding free self-defense classes.

The program is just an extra set of eyes and ears for a community looking to feel safe.

"This is is an opportunity for us to give back to the community as well," said Leong. "We're just trying to do our part."

Right now, volunteers go out three times a week. They're also hoping to have more people join so they can do this nightly.