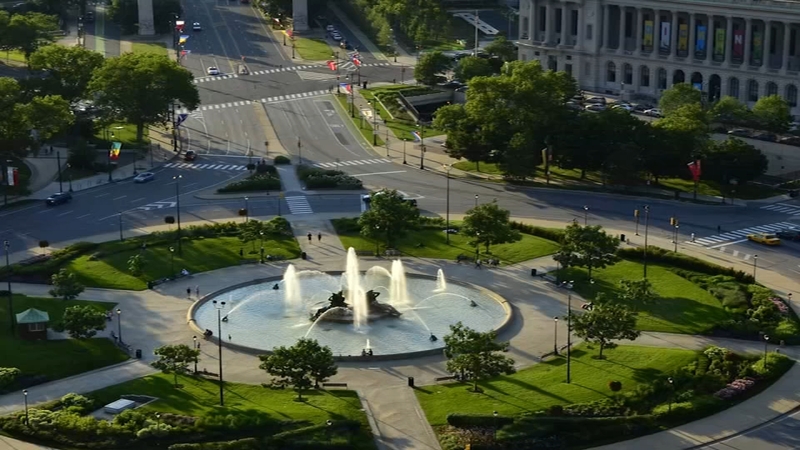 PHILADELPHIA (WPVI) -- One hundred years ago Friday was the very first time the grand boulevard was open from end to end and so, of course, there's a Parkway Soiree for this major milestone.

The Parkway 100 centennial has been a yearlong celebration with special events, exhibitions, and free community conversations.

It's one of telling the story of the Art Museum steps.

And the movie that put running them right up there with a visit to the Liberty Bell.

Gail Harrity, President, Philadelphia Museum of Art said, "People come from all over the world."

"To celebrate their own dreams and their own aspirations," added Michael Vitez, author of The Rocky Story.

Garrett Brown, Steadicam Inventor said, "My favorite is a bunch of nuns running the steps in full habits."

That first 1976 Rocky flick took home the Academy Award for Best Picture and the Art Museum steps have appeared in every Rocky movie since.

The fictional boxer has become so much a part of Philadelphia's psyche.

There's a bigger than life bronze statue at the base of the Art Museum steps.

Tom Schomberg, the sculptor of The Rocky Statue said, "Rocky Balboa the underdog who achieves."

And a book about people who've run the Rocky steps.

Michael Vitez, author of The Rocky Story said, "It's a place where they can bring the message of the movie to life."

And while Rocky'in the steps has come to symbolize triumph over adversity, it's the now 100-year-old Benjamin Franklin Parkway that's the real star of the scene.

"By the time he gets to the top and they turn around and there's that shot. That's the money," said Brown.

Sharon Pinkenson, Executive Director, Greater Philadelphia Film Office said, "Without the Parkway and that view, we wouldn't really have this whole aura about it."