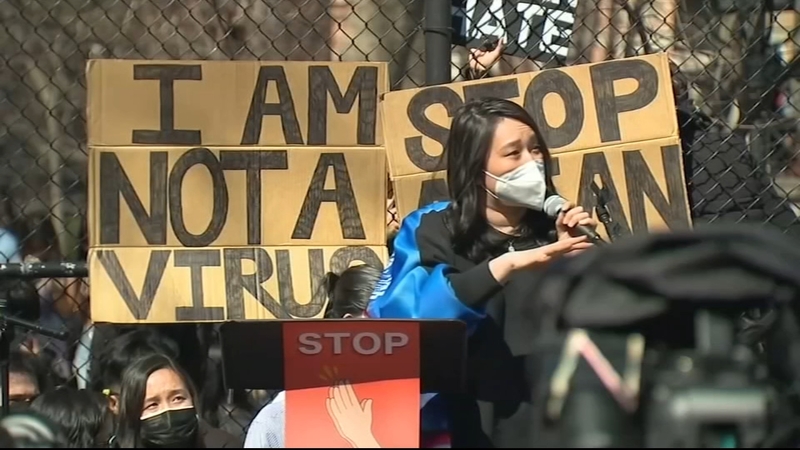 Vigil held in Montco in response to Asian American violence

CONSHOHOCKEN, Pennsylvania (WPVI) -- Equipped with signs and a desire to spark change, speakers at the 'Vigil for Victims of Asian Hate Crimes' in Conshohocken, Pennsylvania on Sunday recounted their own stories of hate and harassment.

Many attendees and speakers said they wanted to break stereotypes and show that women are not submissive or sex objects without worth.

"I wanted to show our local Asian American Pacific Islander community that other people care, that they see us," said Julia Park, vigil organizer. "I wanted them to see in a tangible way that they matter to others."

The event was prompted by the wave of unprovoked violence against Asian American elders and the recent Atlanta-area shootings that left eight people dead, including six Asian women.

Despite the Cherokee County Sheriff spokesman stating the suspect "had a bad day" and the motive was a "sex addiction," Asian advocates say that exemplifies the problem.

"Once again, it's the erasure of being Asian," said Danielle Kwock Phillips, speaker and activist. "As if you can just say 'six women' and omit the Asian part, as if we're nobody and count for nothing? I would say that's absolutely ridiculous. I saw a tweet that said if someone went to three donut shops and only killed cops, would you say he had a sugar addiction?"

Attendees like Peyton Turner of Plymouth Meeting said that the wave of violence and harassment is not just an Asian issue but something that affects everyone.