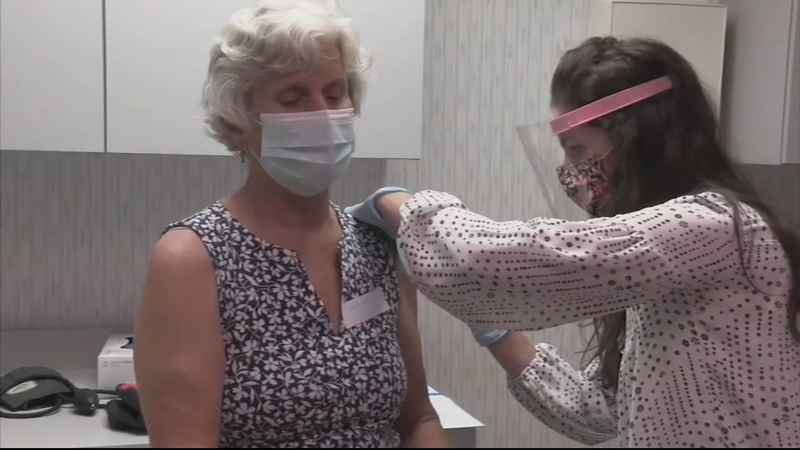 BALA CYNWYD, Pennsylvania (WPVI) -- The Pennsylvania Department of Health announced Wednesday that 100,000 Pennsylvanians may have vaccination appointments rescheduled or canceled after some providers gave second doses of the Moderna vaccine as first doses.

"As the Department of Health continues to review and improve the complex processes necessary to get COVID-19 vaccine from the manufacturers into the arms of Pennsylvanians as quickly as possible, we discovered some providers inadvertently administered the Moderna vaccine shipped to them intended as second-doses as first doses," said acting Health Secretary Alison Beam. "We are taking immediate action to remedy the situation and are committed to ensuring that second doses are available."

To fix the problem, the Department of Health weighed several options including suspending first doses and instead of using them for already scheduled second doses. However, they chose another option that they believe will have less of an impact specifically because many are having issues registering for a first appointment.

"After careful review and discussion with legislators on Governor Tom Wolf's COVID-19 Vaccine Joint Task Force, we have a clear path forward that may include adjusting the timing of second dose administration following CDC guidelines that set the minimum time between doses at 21 and 28 days and the maximum time at 42 days," said Beam.

In a late-afternoon press call, the Pennsylvania Department of Health's COVID Press Secretary Barry Ciccocioppo said it was last weekend that the Department of Health discovered that they were short on the supply. The unidentified providers have been making the mistake since January. He explained some providers may not be impacted because they may have enough doses still on hand.

For weeks, health officials have been telling providers not to hold back administering second-doses assuring providers a second-dose from a separate supply would be available.

Vaccine providers receive two separate doses of shipments of the two-shot Moderna vaccine after placing an order with the Department of Health. Providers then receive the doses directly from the manufacturers. The Department of Health did not realize that the first dose shipments and second dose shipments were not clearly marked. As a result, many providers did not distinguish the difference.

The Department of Health does have a list of affected providers in their system and is in the process of going through the list.

Providers are expected to contact people scheduled for their second dose if they are short on the supply.

"The department is working directly with vaccine providers throughout this process and, in line with the vaccine order I signed last week, will be able to provide more precise information on vaccine allocations each week to increase transparency and predictability with first doses," Beam said.

Montgomery County Commissioner Val Arkoosh said Wednesday that this will affect the county. At least one vaccine site is closed in part because of the shortage.

She added that her office did everything appropriately.

"I can assure you with 100% certainty that our team has been meticulous about keeping the first and second doses separated," Arkoosh said. "The second-doses have all been given appropriately, but I can't speak for any other provider in the county."