Philadelphia to fully reopen in June; more restrictions to be eased next week

More restrictions will be eased on May 21
WPVI 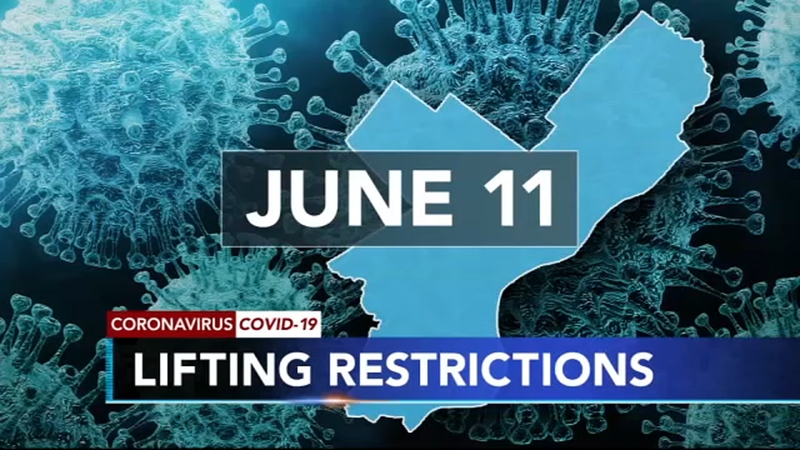 PHILADELPHIA (WPVI) -- Mayor Jim Kenney announced Tuesday afternoon that the City of Philadelphia will drop its "safer at home" restrictions put in place due to the COVID-19 pandemic on June 11.

However, a mask mandate will continue.

"No limits on density or activities anywhere. Only the mask mandate after June 11," said Health Commissioner Dr. Thomas Farley.

"This moment is possible because of the immense sacrifices that Philadelphians of all ages made over the last year," said Mayor Jim Kenney.

However, the mayor pointed out that the pandemic is not yet over.

"We are not yet declaring victory because cases and hospitalizations can rise again at any point if we're not diligent. I urge everyone to be smart, to continue wearing masks around others, and most importantly, to join the more than half a million fellow Philadelphians who already got their vaccine," he said.

The city's date to reopen is nearly two full weeks after Memorial Day, when the rest of Pennsylvania is set to reopen.

"Just a little extra margin of safety," he said.

Farley said he's keeping the mask mandate in place to make sure the dip in cases and the positivity rate is not just a seasonal phenomenon.

"It's not a big deal. It's a light thing. We're not asking people to carry a piano," said Mayor Jim Kenney, adding he planned to wear his mask through the winter.

Meanwhile, more restrictions will be eased beginning May 21:

Restaurants:
-Still 50% maximum capacity, or 75% maximum capacity if they can meet enhanced ventilation standards.
-Distance between chair backs will be reduced from six feet to three feet.
-The requirement for alcohol to be served with food will end.
-Mask requirements remain in effect for those not seated or eating.

Offices:
-Will be allowed to operate with no density limits, but mask requirements are still in effect.

Retail stores, bowling alleys, museums, libraries, etc.:
-Will be allowed to operate with no density limits, but mask requirements are still in effect.

Gyms and indoor pools:
-Will be allowed to operate at 75% of occupancy limit or 15 people per 1,000 square feet.

Indoor gatherings and theaters:
-Will be allowed to operate at 50% of occupancy limit.
-Must enforce a minimum of three feet of distance between persons of different groups.

Outdoor gatherings and theaters:
-If the site has fixed seating, will be allowed to operate at 50% of occupancy limit.
-If the site has no seating, a maximum of 33 persons per 1,000 square feet are allowed.
-Must enforce a minimum of three feet of distance between persons of different groups.

Outdoor catered events:
-Can operate at 50% of occupancy limit, with no cap on number of persons attending.

Outdoor pools:
-Can operate with no density limits or maximum capacity.

Casinos:
-Can operate 50% maximum capacity, or 75% maximum capacity if they can meet enhanced ventilation standards.
-Must enforce a minimum of three feet of distance between persons of different groups.
-Alcohol can be sold to patrons at gaming machines.

-Mask requirements are still in effect

Action News caught up with Erin Wallace on Tuesday morning as she prepared for another work week at her Devil's Den restaurant in South Philadelphia.

Ahead of the announcement, she said she hopes this is one of the last few weeks she has to operate with restrictions placed upon in her business.

"It does not make sense for the city to be the only one to have these restrictions in place," she said.
Along with the rest of Pennsylvania, New Jersey and Delaware have also announced reopening dates.

Throughout the pandemic, Philadelphia city leaders have made their own decisions when it comes to the coronavirus.

And Wallace says at this point the restrictions are costing her business.

"It doesn't stop people from getting in the car or Uber and going a 10 minute ride outside the city and eating and spending their money somewhere else," she said.

And according to Ed Grose, the executive director of the greater Philadelphia hotel association, it's now the same issue for them.

He says clients will continue to pass over Philadelphia hotels until there is a plan for a full reopen.

"We're really hoping that there's going to be a definitive reopening date for Philadelphia because until we have that date we're not going to see any bookings because of the uncertainty," Grose said.
However, not everyone we spoke with says it time to end restrictions.

"I just don't want to see the city do it prematurely and go back into the rut that we were already in," said South Philadelphia resident Emory Marquise.

On Tuesday, the city announced a preliminary date for the Philadelphia Marathon Weekend - November 19 to 21, 2021.

Though plans remain subject to change, the race is scheduled to return to the City of Brotherly Love with a 50% reduction in runners this year.

There will be restrictions at the start and finish lines, and several COVID safety measures will be in place.