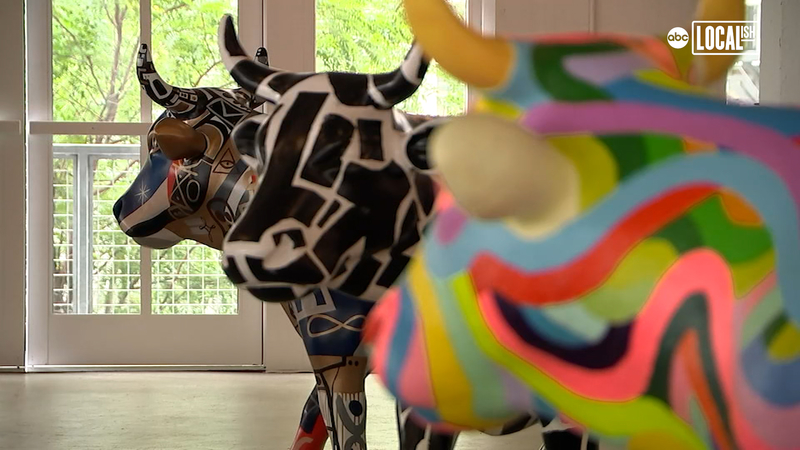 Art for an udderly good cause

NEW YORK CITY -- The CowParade public art exhibit is back in New York City after more than 20 years, and on Thursday, non-profit God's Love We Deliver offered a preview of the event.

The 2021 CowParade will include a diverse array of participating artists, from contemporary art icons to well-known Wynwood graffiti artists to eclectic designers and celebrity supporters.

God's Love We Deliver, a medically-tailored Meal delivery program for homebound New Yorkers who are living with illness, is the exclusive charity partner of the upcoming 100th global event, to be held in New York City from August 18 through September 30.

CowParade events have been staged in more than 80 cities worldwide with more than 6,000 life-size fiberglass cows painted and imaginatively transformed by many thousands of global artists, sculptors and celebrities.

The preview marked the only time when nearly all 78 of the cows were in the same location, before they are sent to various public "pasture" locations across the five boroughs on August 18.

Brooklyn artist Rachel Goldsmith has grown attached to her cow.

"I just keep wanting to hug it," she said. "He's modeled after a highland cow because those have an incredible mop of hair."

That hair was created with a plant based plastic exuded from a 3-D pen, and she calls her cow "Beyond," a play on Beyond Meat

Immediately following the closing of the CowParade, each of the cows will be auctioned, with proceeds going to God's Love We Deliver.

"When the city shut down in the middle of March of 2020, literally the safety net fell away from so many New Yorkers in need," CEO Karen Pearl said.

During the pandemic, their client base surged 30% when many other social service programs closed and because of social distancing guidelines.

"We quickly ramped up our cooking, our packaging, our delivery," Pearl said. "Even though those things were hard to ramp up, because we were also socially distanced."

Even now, the need continues to exceed pre-pandemic levels.

"We've all just gone through a horrible year and a half," Pearl said. "It was like, wouldn't it be great to do something fun and magical for New York City?"

The last CowParade event in New York City was in 2000, which culminated in a live auction that raised hundreds of thousands of dollars for New York City non-profits.

The Mayor's Office estimated that some 45 million people came to see the cows during the three months of the exhibit.

Since its inception in 1999, the CowParade has traveled the world with events in more than 34 countries.