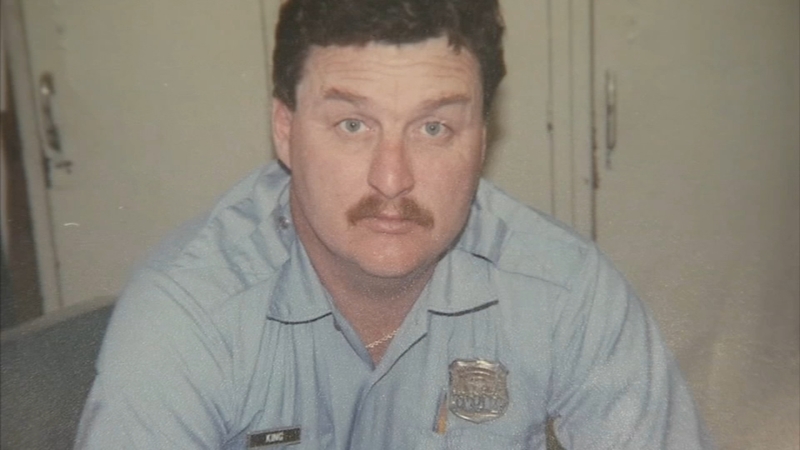 PHILADELPHIA (WPVI) -- Philadelphia District Attorney Larry Krasner has recommended a resentencing that would make a man convicted of murdering a retired police officer eligible for parole.

The officer's son, Ace King, said it's like reliving a nightmare.

"20 years ago I sat in a morgue at Einstein Hospital having to identify my father's dead body and I feel more helpless now than I did back then," he said.

It was December 1998 when King's father, retired police officer Frank King, was killed after a group of armed thieves stormed a bar where King was enjoying a night out with friends.

One of the people convicted was 17-year-old Aaron Smith. Smith was sentenced to life without parole. But a recent US Supreme Court ruling declared it unconstitutional to give anyone, under the age of 18, a life sentence.

King and members of his family say they were stunned when District Attorney Larry Krasner told them he now plans to recommend Smith become immediately eligible for parole.

King recounts his recent conversation with the DA: "Do you champion for our side? And do you go for 30 years minimum, to life. 30 years minimum. He said he cannot do that."

The DA's office sent Action News a statement saying the fact that Smith was not the one who actually shot King is a factor in their decision.

In part, the statement reads: "Only one of the men involved will be resentenced... The two men who carried guns and used them that day will continue to serve life in prison without any possibility of parole."

FOP Lodge 5 President John McNesby says he rests his hope on the fact that when the resentencing hearing is held next Tuesday the DA's office can only recommend a new sentence and that the judge has the final say.

"We're hoping that, in fact, they do keep him another decade or so behind bars because this was brutal," said McNesby. "There was no reason to take a life that night. None whatsoever."

The King family will also be allowed to make a victim impact statement.

"We're going to definitely be there on Tuesday. Absolutely," said King. "My children and his grandchildren that he never got to meet will be there, too."

Our heart goes out the family of retired Officer King, who lost his life some 20 years ago heroically resisting a robbery that occurred in a bar he was patronizing.

I and other high-level DAO supervisory personnel met with Officer King's son and spouse at length at his request. We appreciate his interest, questions and input. We are still following up on one of his requests. We also understand the re-traumatization families go through when re-sentencings of juvenile lifers take place as required the U.S. Supreme Court's ruling that life sentences for juveniles violate the U.S. Constitution. The Supreme Court held it is unconstitutional to sentence juveniles to mandatory life sentences due to their immature brains, which make them less capable of consequential thinking and more capable of rehabilitation than adult offenders.

As a result of that ruling, only one of the men involved will be re-sentenced. He was a juvenile when the killing occurred almost 20 years ago. The two men who carried guns and used them that day continue to serve life in prison without any possibility of parole.

The defendant who is being re-sentenced did not fire, provide, or handle the gun used. He did not struggle with Officer King. He did not mastermind the robbery, lead it, or transport the other participants.

He was convicted of the lesser charge of Second Degree Murder, also known as felony murder, rather than pre-meditated murder (First Degree), because of his lower level of participation and culpability compared to other participants. The defendant's positive adjustment in custody and other important factors supporting the DAO's sentencing recommendation have also been considered, as required by the Supreme Court.

The sentencing recommendation of the Philly DAO, in this case, is consistent with other juvenile lifer re-sentencings by the Philadelphia courts. It is consistent with plea offers currently and previously given by the Philly DAO in this and prior administrations. It consistent with the DAO's policy of evenhanded treatment and of using public resources to support services that actually prevent violent crime in the future--by making resources available for public education, drug and mental health treatment, economic and community development, and community policing. Finally, the sentencing recommendation by the DAO is also consistent with public safety as shown by the very low level of recidivism for juvenile lifers who have been re-sentenced and are no longer in custody in Pennsylvania.