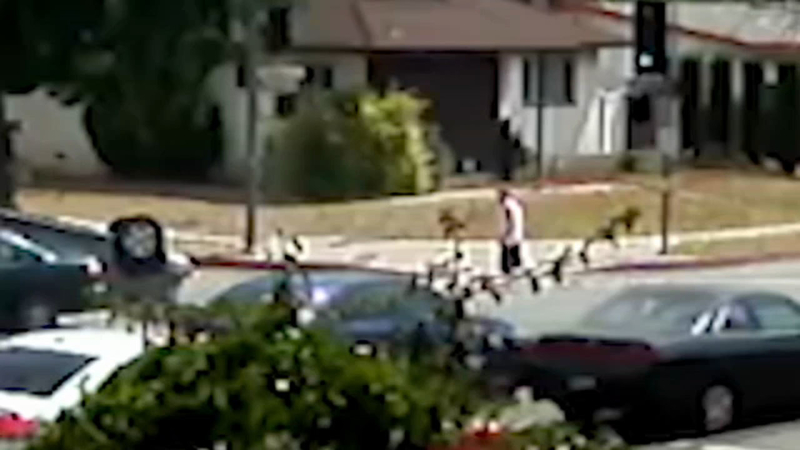 In the video, a car is seen apparently running through a red light at the intersection and smashing into an SUV driving on the cross street with the green light.

The force of the impact sends the larger vehicle flipping over onto its roof.

Actor Danny Trejo discusses his rescue of a young special-needs child who was trapped in an overturned car in Sylmar.

Seconds after the crash, Trejo is seen as the first person running up to the scene. In the video, he's the figure wearing a white shirt with cut-off sleeves and long black shorts running in from the right side of the screen.

A crowd quickly gathers on the street, some watching the scene and others also trying to help. The first police vehicle arrives on scene about three minutes after the crash.

As Trejo told the story later, there was a young child buckled into a car seat and trapped in the back of the overturned SUV.

Trejo and another bystander crawled into the back of the overturned vehicle, unbuckled the car seat and took the child out to safety.

Then as the firefighters arrived and were working to free the boy's grandmother from the driver's seat, Trejo was trying to distract the child from the disturbing scene.

He said he works with special-needs children so he knew how to keep the little boy calm.

"He was panicked. I said OK, we have to use our superpowers. So he screamed 'superpowers' and we started yelling 'superpowers," Trejo said. "I said do this, with the muscles. He said 'muscles.'"

"We got kind of a bond. I kept facing him away from the accident."

The boy's grandmother was injured, but once she was free of the vehicle and it was clear her injuries were not life-threatening, she was reunited with the boy. Other family members arrived on the scene a short time later.

The Los Angeles Fire Department said three people were transported to a hospital, but there were no life-threatening injuries.

Not only is @officialDannyT (Danny Trejo) one of the nicest actors, he’s also a #hero!

He was right behind a crash in Sylmar and pulled a special needs baby out of an overturned car. He distracted the boy until grandma was OK. ♥️ —> https://t.co/tS2Za4bZVZ@ABC7 pic.twitter.com/U9iLzAkHkA