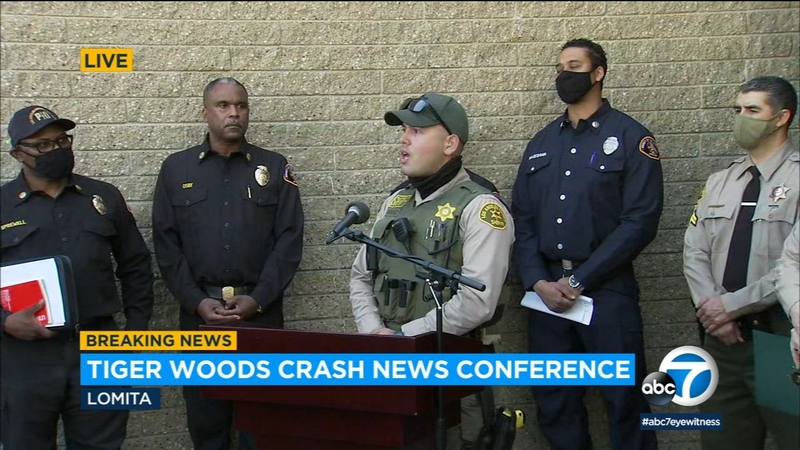 RANCHO PALOS VERDES, Calif. -- The Los Angeles County sheriff's deputy who was first on scene after Tiger Woods was involved in a serious crash described the golf star as "lucid and calm" even as he was trapped in the driver's seat of the mangled vehicle.

Woods was involved in the rollover crash just after 7 a.m. Tuesday in the Rolling Hills Estates community near Los Angeles.

His Genesis SUV struck a sign in the center median, crossed opposite lanes of traffic and rolled over into the brush along the side of the street. The cause of the crash remains under investigation.

Los Angeles County Sheriff's Deputy Carlos Gonzalez, was first on scene at 7:18 a.m., with a neighbor pointing him toward the wreckage.

He found a driver - at that time unidentified - trapped in the driver's seat of the overturned SUV.

Gonzalez quickly realized he did not have the ability to remove the driver from the wreckage himself and kept him company as firefighters were on their way.

"I asked him what his name was," Gonzalez recalled. "He told me his name was Tiger, and that moment I immediately recognized him."

Paramedics were notified at 7:22 a.m. and arrived on scene at 7:28 a.m. They had to use tools to extricate Woods from the vehicle through the windshield.

He was not able to stand on his own, but was placed on a backboard for transportation.

Los Angeles County Sheriff's Deputy Carlos Gonzalez was first on scene after Tiger Woods was involved in a serious crash on Tuesday, Feb. 23, 2021.

Woods was described as suffering major injuries to both legs and was transported to Harbor UCLA Medical Center.

County Fire Chief Daryl Osby noted that Woods was not in need of immediate life-saving measures so was not brought to the nearest hospital but instead was transported to the nearest trauma center.

A medical expert says the initial conversation between the deputy and Woods was part of important measures taken to assess the condition of any accident victim.

If the person cannot speak clearly it may be an indication of head trauma or a serious drop in blood pressure, said Dr. Anthony Cardillo, a former EMT who is now CEO of Mend Urgent Care in Los Angeles.

"His mental status is very important to assess," Cardillo said. "That's what the officer was doing. It tells us whether he has intercranial injury or cardiovascular injury."

If the patient cannot speak, he said, it could indicate the body is going into shock and experiencing a sharp drop in blood pressure, Cardillo said.

The fact that Woods was articulate and was able to give his own name is a good sign, he said.

"These are all very important things for us to determine the patient is stable - but could certainly be critical, requiring extra effort in extricating him."

Gonzalez, who has years of experience patrolling the area, said he has seen many accidents on that downhill stretch of Hawthorne Boulevard. The speed limit is 45 mph, but Gonzalez said he has clocked vehicles going 80 mph and he has responded to fatal collisions in the area.

"That specific stretch of roadway is one of our trouble spots," Gonzalez said. "Our locals in Rancho Palos Verdes, in Rolling Hills Estates know that it's a hotspot for traffic collisions as well as speed. In my experience as a deputy who is traffic-trained and works a traffic car, I have seen many collisions."

Woods was wearing his seatbelt and the vehicle's airbags did deploy. The interior of the vehicle was mostly intact.

"The nature of his vehicle, the fact that he was wearing a seatbelt - I would say that it greatly increased the likelihood that it saved his life."
Report a correction or typo
Related topics:
rancho palos verdeslos angeles countyrolling hills estatescar crashrollover crashtiger woodscrash
Copyright © 2021 KABC-TV. All Rights Reserved.
More Videos
From CNN Newsource affiliates
TOP STORIES