Moves in Medicine: Diagnosing CTEPH before it's too late 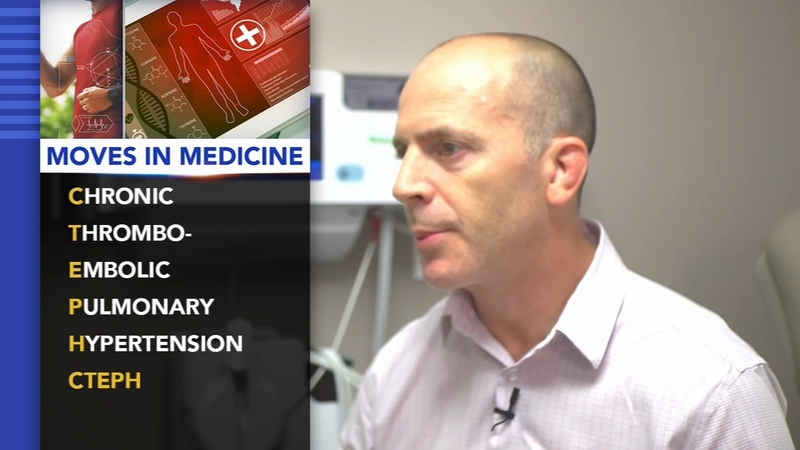 Moves in Medicine: Diagnosing CTEPH before it's too late

A groundbreaking program boasts the most expertise on the East Coast for a condition that's often misdiagnosed. And that condition could be life threatening.

Tara Cottee's doctor said her heart function looks perfect now. That's her story today, but six years ago she was tethered to an oxygen tank at just 34-years-old.

"Even with the oxygen I still couldn't breathe good," she said.

Misdiagnosed with a sinus infection, she said she became alarmed when she started coughing up blood. That's when she sought help from Dr. Paul Forfia, co-director of Temple Health's CTEPH Program.

CTEPH stands for Chronic Thromboembolism Pulmonary Hypertension. "This is a condition where there's elevated blood pressure in the lungs related to residual blood clot in the lung leftover from a pulmonary embolism," said Dr. Forfia.

A pulmonary embolism is when a blood clot that developed in the legs or pelvis, breaks off, travels through the body and gets lodged in the lungs.

"On blood thinners about 95 percent of people will have their clots clear from their lungs over time, usually by about three months," said Dr. Forfia.

It's that last five percent who Dr. Forfia said will develop CTEPH.

Cottee had had a previous pulmonary embolism. She said following surgery with Forfia's team, she's a new person.

"I mean little things, you know, little just walking across the room just being able to breathe in general without oxygen," she said.
"In Tara's case she had total reversal of pulmonary hypertension, total reversal of her right sided heart failure and restoration of a normal quality of life within a matter of days to weeks," explained Dr. Forfia.

"CTEPH more than any other form of heart failure that I care for is the most complex in terms of diagnosis and evaluation," said Dr. Anjali Vaidya, who is also a co-director of the CTEPH program.

That mean's going to the experts. Temple Health is the second largest CTEPH program in the country and the only one on the East Coast.

"The delay in diagnosis is really a problem that so many of our patients suffer from and often its years before the accurate diagnosis is made," said Dr. Vaidya.