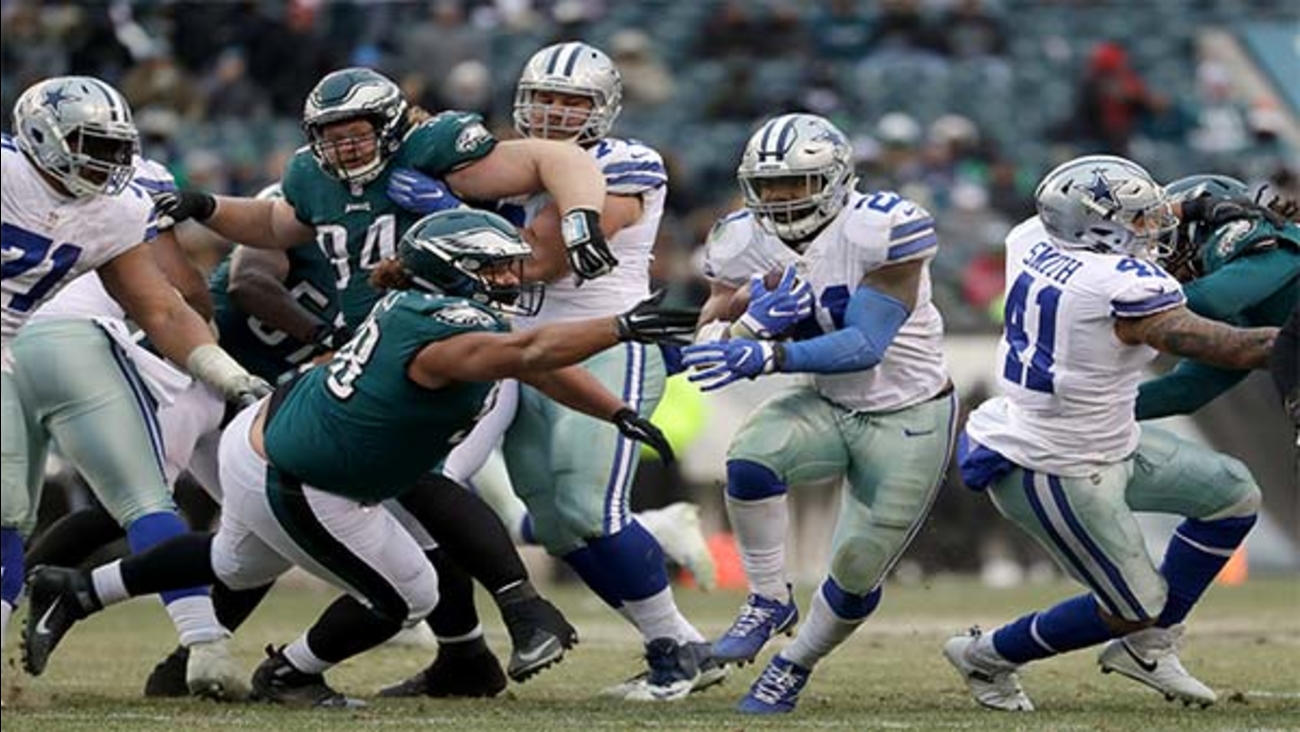 Dallas Cowboys' Ezekiel Elliott in action during the second half of an NFL football game against the against the Philadelphia Eagles, Sunday, Dec. 31, 2017, in Philadelphia. (Michael Perez)

The Eagles (13-3) rested several starters on a frigid day and played others briefly after securing the NFC's No. 1 seed last week. They'll host a playoff game on Jan. 13 or 14.

The Cowboys (9-7) earned their second straight winning season for the first time since five in a row from 2005-09. That's little consolation for Dallas, which was eliminated from playoff contention in Week 16.

Philadelphia has two weeks to work on its slumping offense.

Nick Foles struggled in one quarter, going 4 of 11 for 39 yards with one interception. Foles was excellent in his first start after Carson Wentz went down for the season, tossing four TD passes in a 34-29 win at the Giants on Dec. 17. But he has followed up with two poor performances.

Second-year pro Nate Sudfeld replaced Foles in his first career game. He was tackled inside the 5 after catching a lateral on a desperation play to end the game.

The Cowboys drove 99 yards for the first score. A holding penalty on Rasul Douglas on an incomplete pass on third down extended the drive and Prescott connected with Butler on a slant on third-and-7. Dan Bailey hooked the extra point wide left, only his second career miss in 278 tries.

The teams were 0 for 12 on third and fourth down before the Cowboys converted on third down late in the second quarter. The Eagles got their first third-down conversion midway through the third quarter. Sudfeld then ran 22 yards on another third down and the crowd roared.

Philadelphia's best drive with Foles was the game opener. The Eagles drove to the Cowboys 39 before Torrey Smith dropped a pass on third-and-7. Foles was hurried and threw an incomplete pass on fourth down.

On the ensuing possession, Dannell Ellerbe stopped Elliott on fourth-and-1 at the 42.

Foles underthrew Alshon Jeffery and was picked by Chidobe Awuzie at the Cowboys 48 on Philadelphia's third possession. It was Awuzie's first career interception. The offense went three-and-out on the first unit's fourth and final series.

Eagles P Donnie Jones ran onto the field for a punt with his warmup pants still on and had to rip them off before the snap. He pinned the Cowboys inside the 5 with his punt and later placed one at the 1.

Cowboys: Awuzie left the game with a shoulder injury.

Eagles: A first-round bye followed by a home playoff game on Jan. 13 or 14.