A house divided: Family split rooting for Eagles and Patriots 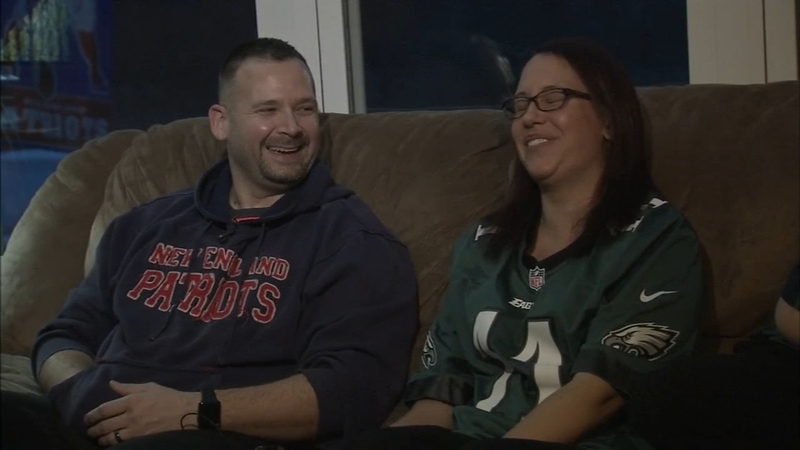 YARDLEY, Pa. (WPVI) -- While the trash talking has already started between Patriots and Eagles fans it's been steady all season in the Smith house in Yardley, Bucks County.

Mike is a Patriots fan and Laura is a diehard Eagles fan, and they'll be rooting for their teams Sunday as a house divided.

"I just like to walk by and remind them they're going to lose on Sunday," Mike said.

Laura responded with: "We say, 'Brady's so old, he needs to retire. He needs to go away.'"

The trash talking at the Smith home has been non-stop once it became clear the Eagles and Patriots were bound for a re-match at the Super Bowl.

"Remind them we've won a few, they won none," said Mike.

Mike and Laura's daughter, Maddie, explains it's all in good fun.

"That's kind of how we bust each other. We're not being mean," Maddie said.

Just serious about their team.

Mike has been a Patriots fan his whole life. Laura is die hard about her Birds. Their older daughters rocks the green, while their twins are split on their loyalty.

Even outside the family home it's not clear where loyalties lie, with flags for both teams flying.

For the Smith family, Sunday boils down to one thing: bragging rights.

"If the Eagles won, I was willing to do an Eagles tattoo. If Pats won, she'd get a Patriots tattoo. But she's not having that. So, we're just going to call it bragging rights and jersey wearing," Mike said.

And that's what's at stake. The Smith family has decided, whoever loses has to wear the winning team's jersey every Sunday next football season.

So Mike, get ready to wear a lot of green.