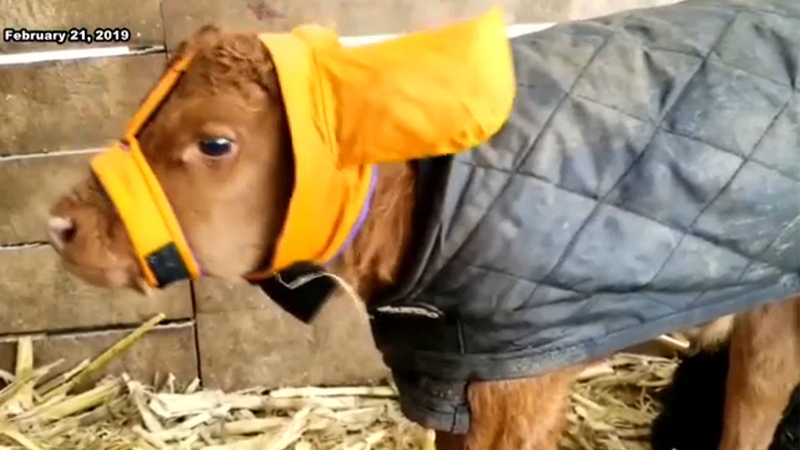 Since then, she's had to move out of her aunt's embroidery shop and into a manufacturing facility to keep up with the global demand.

"This spring, we couldn't even come close to keeping up," said Moo Muffs owner Holly Poad.

According to WMTV-TV, a team of four professional sewers are cranking out 350 Moo Muffs a day, and it didn't take long for the colorful creations and adorable faces of calves to go viral.

"She doesn't look too enthused about having her little earmuffs on," said Poad as she held a calf.

Moo Muffs are now in the hands of professionals. What would have taken Poad's aunt Kim about 20 minutes to make now takes a matter of minutes at a manufacturing company in Milwaukee.

"It's all more uniform and professional-looking now because my cutting skills probably weren't a hundred and ten percent," said Poad.

Mauricio Barboza and his team at Janco Industries work with all types of small business owners to bring their products to life.

"This one was one of those shocking ones," said Barboza. "We saw it as a new challenge and we said, 'Yes. We can make it happen.'"

Poad said she's shipping the earmuffs out fast to buyers all around the world.

"The website just got launched two weeks ago now and there's been so many views and everything and orders off of that," she explained. "That has really taken off."

Not only does she ship from her home base, she now has distributors in South Dakota and Japan.

"He contacted me and it was all like in Japanese," Poad gleefully explained. "I had to literally use Google Translate. As soon as I received payment, I sent him his hundred and he actually was going to order a thousand, but he wanted to make sure they fit their kind of cattle."

Poad said she's also working to get distributors in Canada and a little closer to home in Fort Atkinson.