School principal out after audio recording of her berating students

WABC
HAVERSTRAW -- There has been a shakeup of the administration at a school in Rockland County following an Eyewitness News Investigators exclusive about a principal caught on an audio recording berating students in multiple profanity-laden tirades.

Now, we've confirmed that Kimberly Taylor is out, with the superintendent saying is no longer in the building and that the Hilltop School for special needs children in Haverstraw is currently being run by two assistant principals.

Starting next month, the school will have a new principal, school psychologist Dr. Christine Ditrano.

After our investigation aired, we received numerous calls and Facebook messages from parents, former students and teachers who backed up the story told to us by former teacher's aide Kenneth Egan. He made the recording back in 2011 and then was fired last year after making repeated complaints about Taylor.

The worst he says he saw was when Taylor became unhinged after two students got into a scuffle during a graduation rehearsal.

"And this is what will happen tomorrow?" she screams. "Who started this (expletive)?"

Egan says she then dragged one of the two kids up to the front of the auditorium filled with special needs students.

"This is a retard," she says. "How embarrassing, a disgusting embarrassment, get him the hell out of my sight."

On another recording, Taylor rips into a student for failing to give his seat to a teacher.

Former Hilltop student therapist Maureen Grace reached out, claiming she actually witnessed Taylor physically abuse children and that she complained repeatedly. She said that students were terrified of their principal.

One particular incident sticks out in her mind, when she says Taylor shoved a 13-year-old into a metal cabinet. That's when she says she called Child Protective Services.

"The kid was traumatized," she said. "He was shaking like a leaf after she left, because she screamed right in his face."

She says CPS told her they wouldn't investigate.

The superintendent said that district officials remain deeply committed to the children and that they are proud of their students whose academic performance is above the state average for children with learning disabilities.

The new principal begins on March 1. 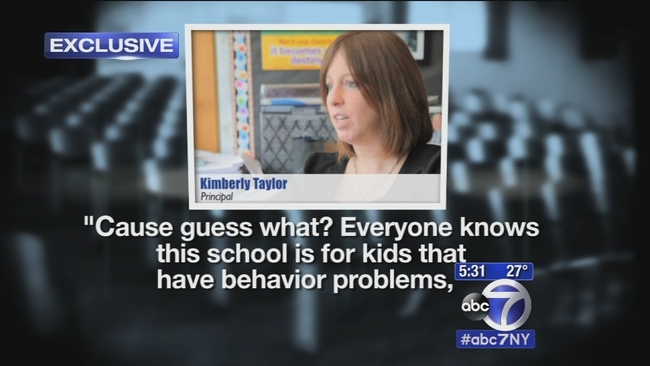