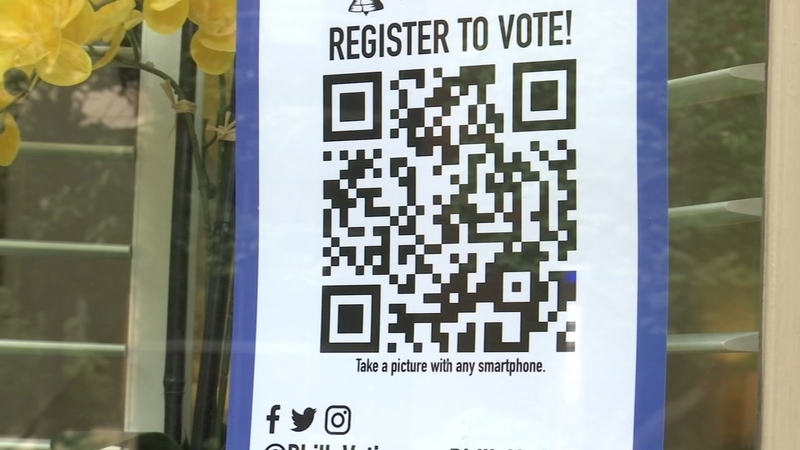 PHILADELPHIA (WPVI) -- On some book stores, cafes, and hair salons in Center City, you may come across a sign with something called a QR code on it advertising a website called Phillyvoting.org.

"Because of COVID-19 we're not seeing the same door-to-door, get out the vote type of operation that you normally do," explained co-founded Jonathan Lovitz.

While the domain mentions Philadelphia, the website is a one-stop-shop for voting resources in Pennsylvania, New Jersey, Delaware, and even federal elections too.

The founders say it's a self-funded, non-partisan and non-contact effort to engage voters specifically in the LGBT and Black communities.

"Just the other day Jonathan and I walked through Rittenhouse Square carrying the sign around, and as people were hanging out with their friends, people were giving us a thumbs up," said Jason Evans, a co-founder.

In 2016 in Pennsylvania, the margin of victory for the presidential election was 60,000 votes, but the founders of "Philly Voting" say a lot of voices went unheard.

"In the LGBTQ community alone, there were 100,000 unregistered people in Pennsylvania, so that's why we're working so hard to galvanize diverse communities because so often, their voices aren't reflected or heard in halls of power," said Lovitz.

"We are also targeting the black and brown communities because there are so many close ties and intersections and relationships that are there. these are the voices that need to be amplified," said Evans.

To use the QR code, all you have to do is open up the camera on your phone, point it, and open up the link. From there you'll be able to scroll through all the information you need to get ready for this election.