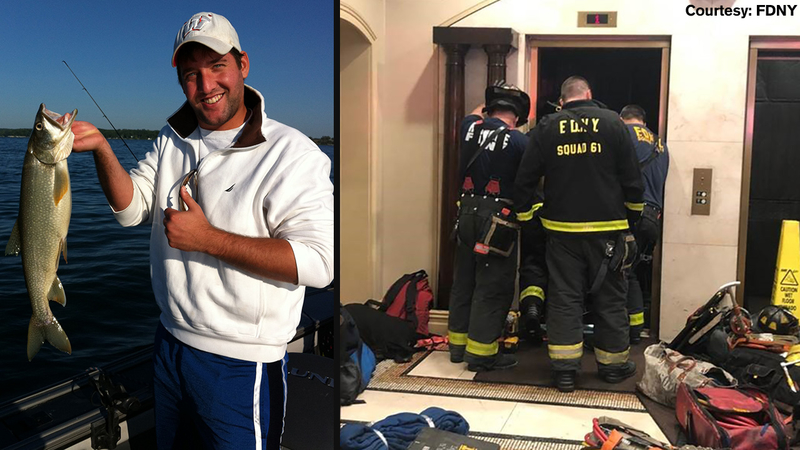 KIPS BAY, Manhattan -- A man died when an elevator suddenly dropped in a Manhattan building Thursday morning, crushing him.

Authorities say the victim was getting off in the lobby of the Manhattan Promenade building on Third Avenue in Kips Bay just before 8:30 a.m. when the elevator malfunctioned.

He reportedly became trapped between the elevator car and a shaft wall and was crushed.

Firefighters tried to rescue him, but the victim -- identified as 30-year-old building resident Samuel Charles Waisbren -- was pronounced dead at the scene.

"He is not going to be able to be a father, have a family, and live the life we all hoped for him," he said. "He loved New York City."

"Sam was a great friend to many at CB Insights, and his wit, humor and intellect will be missed," the company said in a statement. "We are shocked and stunned by his loss and will miss him dearly. Our thoughts are with his family."

The victim's father also said the elevators were a constant problem.

The heartbroken father of the 30-year-old man killed in an elevator accident in NYC is speaking out.

Charles Waisbren said his son grew up in Wisconsin but loved the city.

"Fantastic boy," he said. "He was full of life. Very very sensitive, conscientious, fun loving, just a million friends and everyone loved him."

The incident Thursday caused chaos in the building.

"It was just a lot of confusion and a lot of fear," resident Dana Sergen said. "Everyone was really sad and really scared."

The incident was captured by the apartment building's surveillance system, which police are reviewing.

"No one really knew what was going on," Sergen said. "They knew something happened with the elevator. A few people heard someone was stuck."

Officials said two other people were also on the elevator and exited before the victim.

"I left 10 minutes after this happened," Sergen said. "My children could either not have a mother, I could have lost my children if they were the ones in the elevator."

Residents confirmed the elevators have been an issue in the past.

"It always jumps between floors, it's like that Halloween Horror Nights thing when you're in that scary elevator that hops up and down," one resident said. "It's really bad."

On May 29th, an anonymous 311 call asked for one of the two elevators to be inspected at the building. The Department of Buildings found it was missing a key safety component and shut it down, issuing a fine of nearly $1,300.

The citation read: "Door zone restrictor has been tampered with, disabled and rendered inoperative. This is a safety device to ensure elevator passengers' safety. Repair restrictor and contact NYCDOB."

Two days later, it was cleared for use. On Thursday morning, DOB workers were back for routine maintenance on that elevator. It was not the one that came crashing down.

One question investigators are looking into is whether that work triggered the other elevator to crash.

"There have been many, many issues with the elevators not working," Sargen said. "It's obviously never been an issue to this level, but the elevators tend to have many, many, many problems...I don't know if I'll ever feel safe getting back in the elevator again."

Several residents say they are now trying to find a way out of their lease.

The Department of Buildings is investigating.

"DOB is investigating this incident aggressively and will take all appropriate enforcement actions," the agency said in a statement. "Elevators are the safest form of travel in New York, due to the city's stringent inspection and safety requirements. We're determined to find out what went wrong at this building and seek ways to prevent incidents like this in the future."

Jim Dolan reports on elevator safety after the tragic accident in Kips Bay.